Fright Night: Another Hapless Pillaging of a Cult Classic 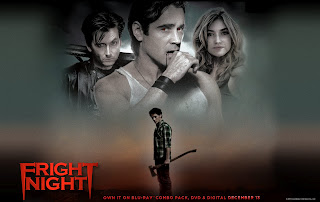 Rating:
**1/2
By: Da'Mon Guy
There are some movies that should come with a warning label attached to them. This film is an example that there isn’t anything that is considered sacred or revered in movie making anymore. As Hollywood continues to remake every film that has any remnant of a following, the 80’s cult classic Fright Night, is the next on the slate. The latest Hollywood butchering recently debuted on video. The 2011 version of Fright Night is an underwhelming, opportunistic pillaging of a cult classic. This debacle is just another example of Hollywood trying to make a couple dollars off of someone else idea. It’s yet another unfortunate exploitation of movie makers capitalizing on the naiveté of a younger generation. The film stars Anton Yelchin (The Beaver), Colin Farrell (Horrible Bosses), Christopher Mintz (Kick Ass), David Tenant (How To Train Your Dragon), and Imogen Poots (Centurion).


Fright Night is crude, pilfering aberration that does very little to improve on the existing film that was used as a basis for this dismal embezzlement. This tasteless pillaging does very little to impress true movie fans as it becomes just the latest, mediocre raping of a cult classic. The movie is based on the film of the same name that debuted in 1985. This version is significantly less enjoyable as it mangles any and everything that endeared the first film to fans in the 80’s.