Conan The Barbarian (2011): A Mildly Enjoyable Return of One of The Great Cult Heroes 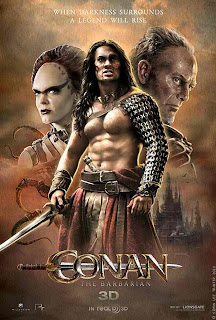 Rating:
***
By: Da'Mon Guy
Conan the Barbarian returns to the screen after a 17 year absence. This newest iteration is a violent, bloody exhibition that is an interesting blend of savagery and sorcery. It’s an entertaining tale of vengeance and redemption that returns the character to its roots. The film stars Jason Momoma (Game of Thrones: HBO series), Ron Pearlman (Season of the Witch), Stephen Lang (Avatar), Rachael Nichols (G. I. Joe: The Rise of Cobra), Rose McGowan (Planet Terror), and Leo Howard (G. I. Joe: The Rise of Cobra).


Conan the Barbarian is an action-oriented, rousing tale that features a high level of brutality and is stockpiled with blood, guts, and gore. This the first big screen usage of the character since the duo of films to star Arnold Schwarzenegger in the early 1980’s. This is the third film to be based on the character created by Robert E. Howard.