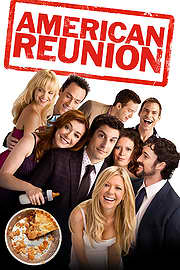 There are very few franchises that can equal the success of The American Pie series of films. With three major motion pictures and five direct to video additions, the American Pie franchise has had more films in the last 10 years than any other franchise in recent years. It attempts to continue the success of the first three films in the series with the return of the original cast that endeared the high school misfits to the American public. American Reunion is a mildly humorous, nostalgic farce that comically continues a franchise as it embellishes on the transition of life. The film intertwines a high level of sexual innuendo with some insanely awkward situation in an attempt to recapture the magic of a modern day franchise. The movie stars Jason Biggs (My Best Friend's Girl), Allyson Hannigan (Love, Wedding, Marriage), Sean William Scott (Goon), Tara Reid (American Pie 2), Eugene Levy (Goon), and Chris Klien (Street Fighter: The Legend of Chun-Li).

American Reunion is the latest addition to the American Pie franchise that returns the Class of 99 to the screen for the first time since the third film in the series. The film invokes nostalgia from its opening moments with an all too familiar scene that is nearly synonymous with the American Pie series of films.
For the full review, click the link below:
http://www.examiner.com/review/dvd-review-american-reunion?cid=db_articles