The Adventures of Tin Tin: A great updating of a classic character 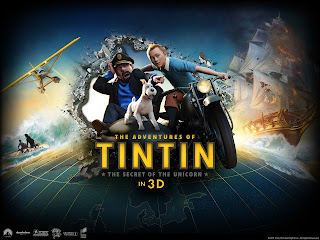 ﻿
The Adventures of Tin Tin is a stunning, daring adventure that unfolds through the implementation of great visual imagery. It’s an exciting modernized reintroduction that breathes life into one of the famous characters of yesteryear. The film is blessed with the voice talents of an all star cast that features the likes of Jamie Bell (Man On A Ledge), Andy Serkis (Rise of the Planet of the Apes), Daniel Craig (Dream House), Toby Jones (Snow White and the Huntsman), and Nick Frost (Paul).
The Adventures of Tin Tin is an excellent intersection of modern day, cutting edge animation and old school story telling. ntriguing mystery that is intertwined with great convergence of action, adventure, and humor. It is the creative collaborative culmination of two of the bigger names that work behind the camera.

The Adventures of Tin Tin is directed by Steven Speilberg and produced by Peter Jackson. It’s a film that is based on the once popular character of the same name that appeared in a French newspaper, Le Petit Vingtieme in 1929. The character of Tin Tin was created by Belgian artist George Remi.
Click the link for the full review:
http://www.examiner.com/article/dvd-review-the-adventures-of-tin-tin-a-great-updating-of-a-classic-character?cid=db_articles
Posted by Da'Mon at 12:30 PM