Goon: Beats the laughs out of you 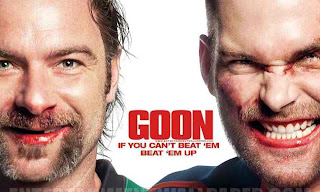 The story of the underdog is a great way to get movie lovers into a film. Society loves the story of the person who overcomes the odds the succeed in the end. Movies about sports and the underdog story are some of the best. Films like Rocky, Miracle, and even Dodgeball have a way of giving fans that motivation to stand and cheer as your oddballs and outcasts rise to the occasion. There are great sports movies then there’s Goon. Goon is a humorously violent take on the world of hockey. The movie is laced with an insane amount of brutal violence, vulgarities, and obscenities. The film stars Sean William Scott (American Reunion), Leiv Schribber (Salt), Eugene Levy (American Reunion), and Jay Buschel (She’s Out of my League).


Goon is an outrageous, jocular debuachery that takes an unusual approach to the often told underdog story. This is a brutal humorous approach to the sport of hockey. It’s a direct to video film that debuted in 2012. It focuses on the one of the more essential but less honorable aspects of hockey. The fights that occur in the sport of hockey as nearly as integral to the sport as pucks and sticks. Goon shifts its focus to the more notorious aspects of the sport. Goon puts the punches, blood, and carnage in the forefront as it concentrates on this dynamic for the basis for this story. The brutality is as essential to the sport as pucks and skates.
Click the Link to get the full review:
http://www.examiner.com/review/dvd-review-goon-beats-the-laughs-out-of-you?cid=db_articles﻿
Posted by Da'Mon at 12:38 PM