Lockout: A great example of the sad state of sci-fi 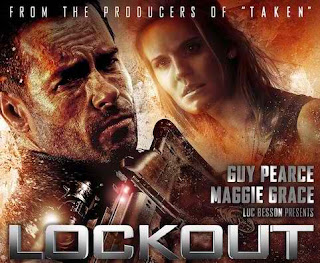 The sci-fi genre is just does not offer what it once did. Once a upon a time, science fiction movies were a driving force in the movies. Film franchises like Star Wars and Star Trek help to define a generation but those days are nearly forgotten amongst today’s generation of up and coming movie lovers. This generation enjoys more reality based sci-fi with films like District 9 and Cowboys and Aliens. The larger than life out of this world space operas are nearly extinct. Lockout is a fairly decent combination of both, the larger than life sci-fi that is intermingled with some manner of a realistic twist to it. Lockout is an action oriented manifestation that epitomizes the modern state of action films. This is a film that is big on action and comes up extremely short on substance. It’s a promising premise in that is completely marred and utterly mishandled within its failed delivery. The film stars Guy Pierce (Prometheus), Maggie Q (Faster), Peter Stormare (Get The Gringo), Lennie James (Colombiana), Vincent Regan (Clash of the Titans 2010), and Joseph Gilgun (Harry Brown).


Lockout is mishandled, lackluster misfortune that moves a frenetic pace. It is the latest film to fall prey to approach that Hollywood has taken in order to accommodate today’s ADHD generation’s attention span when watching movies. It is jam packed with mindless action but it offers little to no sustenance.
Click the link for the full review:
http://www.examiner.com/review/dvd-review-lockout-a-great-example-of-the-sad-state-of-sci-fi?cid=db_articles﻿
Posted by Da'Mon at 2:50 PM