21 Jump Street: Teenage The FUCK UP 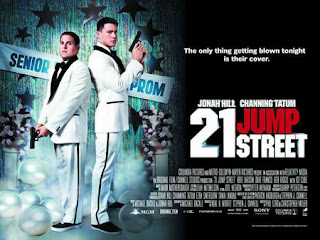 Rating:
****
By: Da'Mon Guy
Remakes, re-imaginings, re-introductions. You name it and film makers in Hollywood find a way to pimp the concept of former (classic) films/TV shows in order to squeeze a few dollars out of movie goers. Too often they alter the vision of the original so much that the film no longer resembles the original. More often than not, these new films are such a rip off of the original that it completely infuriates the long time fans of the shows. The film makers often loose the true essence of what made that show or movie a hit. However every so often, in the process of enduring one of these butchering, Hollywood produces a hit. That happened in the case of this year’s comedic version of the former classic 90’s television show, 21 Jump Street which was created by Stephen Cannel and Patrick Hasburgh.

21 Jump Street is one of this year’s latest attempts at reintroducing a classic television show for the new generation. The big screen adaptation is far more comedic based. Its an obscenity laced, teen focused debauchery that uses a high number of sexual innuendo. The movie is a full circle coming of age comedy that refines the buddy cop genre. hilarious undertaking on the buddy cop genre. The film stars Channing Tatum (Magic Mike), Jonah Hill (The Watch), Ice Cube (Lottery Ticket), Deray Davis (Jumping The Broom), and Rob Riggle (Big Miracle).
Click the link to finish the article:
http://www.examiner.com/review/dvd-review-21-jump-street-teeage-the-freak-up﻿
Posted by Da'Mon at 4:12 PM