Blitz (2011): Brutal crime drama that is not the usual Statham film 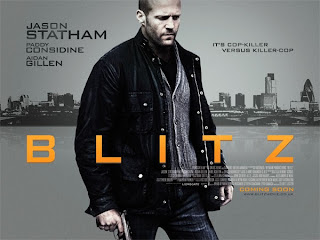 Rating:
**1/2
By: Da'Mon Guy
The modern action star is nearly extinct. The lone action star that is left, Jason Statham has never gotten his just due. Statham’s combination of martial arts, physicality/toughness, and charisma are unmatched by no other action star in present day movie making. One of his latest vehicles, Blitz, debuted on video last year. Blitz is a malicious, brutal crime thriller that is filled with vulgarities and obscenities. The movie stars Jason Statham (The Expendables 2), Paddie Considine (Submarine), Aidan Gillen (The Dark Knight Rises), Zawe Ashton (Weekender), and David Morrissey (Basic Instinct 2).

Blitz is a moderately enjoyable film that revolves around a disgruntled police officer that is hot on the trail of a serial cop killer in London. Blitz premiered in 2011. This is not the usual “Statham” type of action film. Blitz is a crime drama. Statham’s trademark action style gives way to the brutal killings the plot of the film focuses on the relentless pursuit of the cop killer.
Continue reading, click the link:
http://www.examiner.com/review/dvd-review-blitz-2011-brutal-crime-drama-that-is-not-the-usual-statham-film﻿
Posted by Da'Mon at 1:43 PM