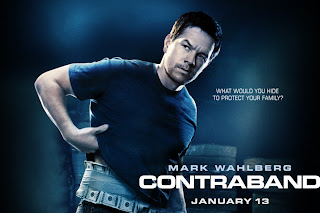 Movies can make even the most nefarious of lifestyles appealing. One of the great aspects of film, that it allows the audience to live vicariously though the experience. Some the greatest characters in Hollywood have made being the bad guy good. From Tony Montana (Scarface) to Frank White (King of New York) to Darth Vader (Star Wars), bad is the way to be. But there are certain films that come along and make being on the outside of the law the way to go. Films like The Italian Job, Ocean’s 11, and come out and then being a fugitive starts to look very appealing. Contraband falls in line as one of those films. Its one of those films that makes being a criminal cool. The film is comprised of a talented casts that features the likes of Mark Wahlberg (The Fighter), Kate Beckinsdale (Underworld: Awakening), Ben Foster (The Mechanic), and Giovanni Ribbissi (The Rum Diaries).

Contraband is a intriguing, nefarious manifestation that entertainingly intertwines strong themes about loyalty & family with insightful glimpse into the world of smuggling. The film is a good heist story. Its an action thriller that is commingled with a powerful theme about love and family. The movie that harkens back to other classic stories of thievery. The film is very remindful of other movies of its nature like The Italian Job (2003) and The Score (2001). The movie is based on a Icelandic film named Reykjavik-Rotterdam that premiered internationally in (2008).

To continue reading, click the link below:
﻿
http://www.examiner.com/review/dvd-review-contraband-2012-a-nefarious-happenstance-that-makes-bad-guys-cool
Posted by Da'Mon at 7:36 PM