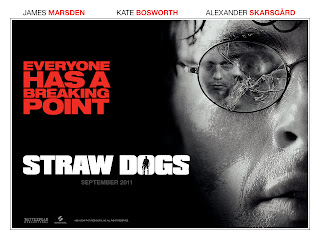 There really should be a quota set on the amount of remakes that can be made in a year or over a certain time frame. The insane number of remakes that come out in modern movie making is becoming sickening. Why is it that the unmitigated effort of Hollywood to remake every film that is so unrelenting. Straw Dogs is one of the latest films to get an updating. This new version retells the story that was brought to life some 30 yrs ago. Straw Dogs is taut, theme driven drama that aptly shows the gambit of human emotions that can drive one to incomprehensible lengths. it’s a film that shows what can happen when someone is pushed to the brink of their limits. The film stars James Marsden (Hop), Kate Bosworth (The Warrior’s Way), Alexander Skarskgard (13), Laz Alonzo (Jumping The Broom), Dominic Purcell (Blade: Trinity), and James Woods (Justice League: Crisis on Two Earths).


Straw Dogs tension filled, remake of a 1971 film of the same name. The original film starred Dustin Hoffman and . it’s a uneasy, tense tale that explores the lengths that sex, desire, and jealousy can motivate the tension/envy. it’s a story that showcases how those negative emotions can inspire jealousy as well as intolerant discrimination between social classes.