Justice League: Doom: A creative reinvention of the 1970's Superfriends 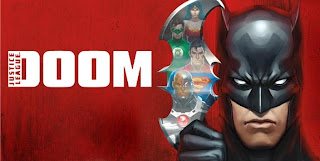 Justice League: Doom is a dynamic, invigorating adventure that strikes the heroic members of the Justice League of America (JLA) at their core and challenges each of their resolve. This is the newest animated feature from DC Comics that uses the 1970’s version of the Justice League known as the Superfriends as a basis for this new entertaining tale. “Doom” is a creative reinvention of one of the more beloved incarnations of DC comics super team. This animated feature is composed of an all star voice cast, many of whom have appeared in other DC animated movies such as Nathan Fillion (Green Latern: Emerald Knights), Tim Daly (Superman/Shazam), Kevin Conroy (Batman: Gotham Knight), Phil Morris (Smallville: TV series), Susan Eisenburg (Superman/Batman Apocalypse), Michael Rosenbuam (Smallville: TV series), Nathan Fillion (Green Lantern: Emerald Knights), and Carl Lumbly (Batman: The Brave and the Bold: TV series).

Justice League: Doom is an adult themed, intense convergence of a number of stories that have made use of the DC comics super team, The Justice League of America (JLA). This is a remarkable story that manages to use filter in many concepts that were addressed in other stories such as The Watchmen, JLA: Tower of Babel, and the Omac conspiracy. The film is about the use/abuse of power. it’s a fiction based story that extends far beyond the concept of just fiction. The theme of this film is far greater than just the usual good vs. evil or good overcomes evil. This is more of a film that questions the nature of power and who holds domain of the appropriation of it.

For the full review, click the link below:
http://www.examiner.com/review/dvd-review-justice-league-doom-a-creative-reinvention-of-the-70-s-superfriends
﻿