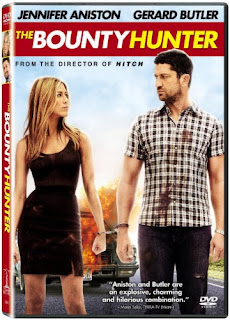 Someone needs to place a warrant out for who ever is responsible for The Bounty Hunter. It’s a boring, obsessively mediocre, romantic comedy. There isn’t really anything about this to make this one stand out from the others. Gerald Butler (The Ugly Truth, Law Abiding Citizen) and Jennifer Aniston (The Break Up, Friends) are the focus of this calamity.

The story starts with Milo Boyd, (Butler) a down on his luck bounty hunter with a penchant for gambling. Milo is on his way to drop his latest bail jumper to jail. This particular bail jumper is Nicole Hurley (Aniston), a reporter, and Milo’s ex wife. The two are recently divorced and have been at odds since then. Milo jumps at the chance to exact some form of revenge. Nicole is a reporter who is hot on the trail of a murder case which has been ruled a suicide. The  pursuit of trying to break open the story of the murder/suicide is the cause of her skipping her court appearance.

The Bounty Hunter doesn’t have one exceptional thing to even make it worth watching. Who knows why this was made? Jennifer Aniston is becoming a type cast actress. All she does of late is romantic comedies and she isn’t even doing those well. She’s a good piece of eye candy and not much more. I can’t remember the last time that she had an exceptional role. Someone please break out the gong for her. Gerald Butler is much better than this garbage. He too is falling into “romantic comedy” doom as every other movie he does is a romantic comedy. He’s a really good actor who often chooses bad films that do not allow his talent to shine. Butler is one of the few actors that successfully pull off starring in multiple genres. He needs to stay away from the bad choices like Gamer, Rock n Rolla and get back to the good choices he made like 300 and Law Abiding Citizen.

I can't think of one good reason to merit the production, the time it took to watch it or the time it took me to write this review other than telling any and everyone that I can to STAY AWAY FROM THIS MOVIE! It was one of the worse movies that I have seen in some time. The plot was senseless, it wasn’t funny, the romance wasn’t there. It is literally the worse romantic comedy that I have ever seen. By the end of the movie all I wanted to do is fight!
Posted by Da'Mon at 4:22 PM