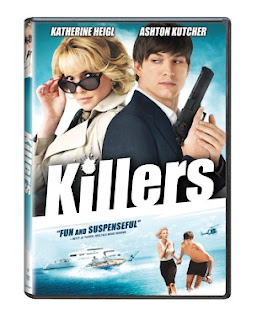 Rating:
**
By Da’Mon Guy
Killers has little to no sparks and the laughs are few. There isn't hardly anything to justify sitting through the length of this movie. This movie is a waste of talent in the latest failed attempt at the combination of comedy, action and romance. Ashton Kutcher, (the Guardian, What Happens in Vegas) Katherine Heigl, (The Ugly Truth, Knocked Up), Tom Selleck, and Catherine O’Hara star in this waste of an hour and 40 plus minutes.
Ashton Kutcher stars as Spencer. A government secret agent who longs for the simple life. The opportunity arises when he is on assignment in Nice, France. In a chance meeting, He crosses paths with Jen Kornfeldt, (Katherine Heigl) fresh out of a failed relationship, is quickly impressed by the scantly clad Spencer. The two exchange looks and smiles in an elevator. After a brief walk then a boring date. The two return to Jen‘s room where she bares some truth about herself to Spenser which quickly appeals to him since he has been forced to lead a life of deception. The story progresses three years as Jen and Spencer are now happily married and now living in suburban America. The fairy tale life begins to unfold as Spenser’s old CIA boss calls him causing his nice boring life to unfold. This leads to attempts on Spencer‘s life as “Killers” come after him to claim a $20 million bounty.

Kutcher is barely believable as a secret agent and Heigl was even less entertaining. Spencer was probably the worst secret agent ever on film as he is beaten up by every person in which he has a physical altercation with. There was some chemistry between Kutcher and Heigl but no where near enough sparks to save this farce. The brief exchanges and references made about marriage are somewhat amusing but are nothing new. Heigl is becoming settled in a particular type of character. This one was no different any of her last roles in romantic comedies such as the Ugly Truth, Knocked up, or 27 Dresses.

Tom Selleck and Catherine O‘Hara were one of the few bright spots. Selleck portrayed a good strong supporting role as the overbearing, over protective father. Catherine O'Hara was funny in her apperances as the mother. She was constantly drinking in nearly every scene. She had a drink for every minute and occasion as the movie progressed, her drinks became more outrageous. It almost appeared that she was drinking to mask what she might have known. But there wasn’t really any reason other than the fact that she was a lush and loved every minute. Even at the end of the movie she had her drink which made it all the more funny.

I was really disappointed in Killers. The movie was full of eye candy for both of the sexes but nothing more. It was just senseless. Kutcher and Heigl are much better actors than this. Don’t waste your time. No sizzle at all. If it weren’t for Tom Selleck and Catherine O’Hara, the movie wouldn’t be worth watching.
Posted by Da'Mon at 6:25 AM