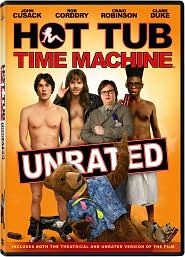 Hot Tub Time Machine is about three men who all are a crossroads in their lives. Three very different circumstances but a crossroads nevertheless. Adam (Cusak) is an insurance salesman who has just gone through a rough divorce and is unsatisfied with his romantic decisions to this point in his life. He questions his choices and wishes for change. Nick (Robinson), a former aspiring musician, is completely unhappy with his job and various aspects of his life. Most notably his wife’s infidelity. But he also questions his choices about his music career or lack there of. Lou (Corddry) is at a life turning point where he questions romance, career, and even life itself. Lou makes a suicide attempt and reunites the three distant friends with the addition of Adam’s nephew, Jacob (Clark). Then, Adam and Nick are forced into watching Lou because he’s been placed on suicide watch. The two decide to take Lou to one of their former favorite hang outs in order to lift his spirits. The guys decide to blow off some steam in a hot tub. The hot tube is actually a time machine and whisks them back to 1986 to a pivotal night in all of their lives, then, the fun begins.

The concept of Hot Tub Time Machine is nothing new. This is the latest attempt takes us back to the 1980’s. The movie has the look and feel of the of the 1980’s. The jokes and comedic scenes are innovative and nicely placed. For example, Nick is in shock after being whisked back to 1986, then while questioning his surroundings he asks someone “What color is Michael Jackson?” These are the types of references that make the movie funny as the four gentlemen struggle with the decision of reliving the night to keep the timeline in order or doing something to change the future.

The movie’s plot is very cliché and extremely predictable but setting it in 1986 makes it entertaining. There’s nothing to knock you out of your seat or wow you but watching the 1980’s look and references make for a really good time. It’s not something that I wouldn't recommend going to the movies for but there are some scenes that are worth viewing. It makes for a good night at home.
Posted by Da'Mon at 4:33 PM