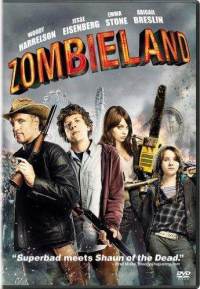 
By Da’Mon Guy
Zombieland is a fresh take on zombie movies. It is a terrific blend of horror, action, and comedy. This is not the first film to attempt to take a comedic approach to the zombie genre, it is however, one of the best. Wood Harrelson (Transsiberrian, Cheers), Jessie Eisenberg (The Social Network, Adventureland), Emma Stone (Easy A, Superbad), and Adigail Breslin (My Sister’s Keeper, Little Miss Sunshine), and Bill Murray (Ghostbusters, Caddyshack) come together to bring us this to make this a hit.

Zombieland is about a plague that strikes the earth which causes most of the entire population of Earth to be changed in to zombies. The survivors aren’t infected initially become infected quickly as they are attacked by the ones who are. The movie opens with Jessie Eisenberg’s character, Columbus, giving us a voice over about the zombie infestation and his “rules” for survival. His survival rules are quickly highlighted on screen as we see are shown hilarious examples of each rule. Columbus's list is actually comprised of 32 rules. He then meets Tallahassee (Harrelson). Tallahassee embraces the state of chaos and becomes a zombie killer. He loves every minute of his newfound profession. The two become unlikely partners then they meet Wichita (Stone) and Little Rock (Brensen). Wichita and Little Rock are scamming sisters on their way to California. The four make an odd bunch but they unwillingly band together as the only apparent survivors in Zombieland.

Woody Harrelson as Tallahassee is one of his best performances ever. He definitely makes the movie worth watching. His outlandish, care free, often reckless attitude and his obsession for zombie killing are some of the best scenes in the movie. The various ways and the sheer enjoyment that he gets out of dismembering zombies are a joy to witness. This standout comedic performance literally carries this movie single-handly as the other stars are completely disposable.

Jesse Eisenberg is bland as ever. Who the hell told this guy that he could act. I hate this dude! I would really like to find out why someone thinks he has any acting ability. He is downright awful. I don’t know or understand when the quiet, needlessly, over talkative character became good for the screen but it is overused and abused. He and Michael Cera have the patent on this. They both portray is so well that I often get them confused. I hate them both. They play the same character in every movie that either of them are in and never bring anything to the film. I hate them in movies so much that I hate them in real life. I really wanted someone to shoot him. Emma Stone (Wichita) was excellent eye candy but not much more. She didn’t bring anything to the film either. She was just as bland as Eisenberg and should have been eaten by a zombie. You could have put any other pretty actress in the role and would have done considerably better. The romance between Columbus and Wichita was dull and needless. We never felt any sparks nor did we care. The only use for the so called romance was to set up the finale. Adigail Bresen was better than Eisenberg and Stone but not by much. She is too good of a young actress to be used in this limited role. Bill Murray's guest appearance was a surprise treat.

Zombieland takes crisp, comedic approach to the zombie genre. It harkens back to the classic George Romero zombie films as well as combining elements of the newer zombie movies like 28 Days later and the Resident Evil films. The movie is funny right from the outset. The opening montage of the movie sets the pace as we watch zombies chase and feast on the innocent. Despite the limited performances from most of its stars, Zombieland is really good. Woody Harrelson's perfomance as Tallahassee in combination with the rules for survival make this movie well worth the time. So relax, sit back, and let the carnage begin!
Posted by Da'Mon at 10:04 AM