Tyler Perry's I Can Do Bad All By Myself 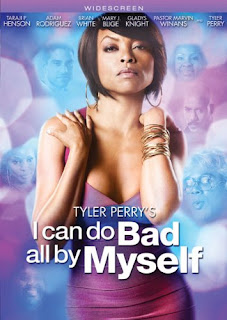 I Can Do Bad All By Myself is one of the more recent films by Tyler Perry to be translated from the stage to the screen. This latest translation stars Taraji P. Henson (The Karate Kid, The Curious Case of Benjamin Button)and features an ensemble cast that includes Gladys Knight, Marvin Winans, Brian White (12 Rounds) , Adam Rodriguez (CSI: Miami), Mary J. Blige, and of course Tyler Perry.

Madea (Perry) awakes to a break in at her home. Upon confronting the burglars, she discovers that the burglars are in fact, three kids. Madea then takes the children to their aunt, April (Henson), who is self indulged and does not want the children. April is a nightclub singer whose self indulgent ways have led to a damaging lifestyle. This lifestyle includes alcohol abuse, a relationship to a married, uncaring boyfriend, and a distant relationship to her mother. April takes in a Mexican handyman (Rodriguez) at the request of the church who tries to convince her to change her self damaging ways. He also tries to convince her to keep the children.

I Can Do Bad All By Myself is not one of Tyler Perry’s better translations from the stage to the big screen. The movie unfolds just like a play. Many of the scenes are too long, over dialogued, and unnecessary. This never had the feel of a movie. The scenes transitioned poorly and the film lacked cohesion. It was just like a play without the fade to black or stage changes. That took away from the positive message of the film. The music was good as it conveyed messages that related to the film. Nevertheless, many of the musical scenes were too long and added to the poor transitioning of the play to the screen.

Tyler Perry’s performance as Madea is a role that we have unfortunately become accustomed to. Madea does have some humorous moments but not enough to warrant Perry’s’ screen time. His overused usage of ebonics has worn out its welcome. Essentially, this character hurts the story. It’s just a way for him to appear in one of his films as he always does.

Taraji P. Henson as April has a good performance, not great, but worth being commended. She displays some moments of brilliance as she shines at times but this character is limited by the limitations of the script and not a reflection of her ability. This one is no different than many of the others that she has portrayed all too often. She really needs to broaden her acting choices to showcase the true talent that these types of roles continually suppress. I did enjoy her ability to convey a wide range of emotions in this film. She was able to portray this emotionally unbalanced character very well in spite of the limitations that she had to endure. This an example of the type of talent that she has. There were two standout performances in the film. Hope Olaide Wilson as Jennifer and Brian White as Randy. Young miss Wilson was really convincing as the angry, rebellious, sixteen year old Jennifer. Her performance was the best in the film. You felt the burden of her life and the pain in every line. Brian White had a really good performance as Randy. His evil was felt in every line from his first scene. You were not supposed to like or have any sympathy for him and because of White’s home run performance, I never did. The other stars, Mary J. Blige and Gladys Knight, popped in but they were there just for face time as they never really added anything to the story.

I am in the middle on this film. I'm not a fan of it but I do like the message that the film tries to convey. This movie appeals to a certain demographic and Perry has mastered it. Too many of the characters are stereotypical but that’s what Tyler Perry makes his fame from. Almost every one of the projects he undertakes never really break any of the stereotypes placed on the characters that he displays. Instead, he embellishes and flourishes on the desires of a target audience. In addition, he uses big names to draw his audience to limited, stereotypical movies. They don’t advance African Americans, instead they hinder us, helping to paint a limited perception.
Posted by Da'Mon at 10:39 PM