30 Days of Night: Dark Days: "A Dismal Follow Up to a Good Movie" 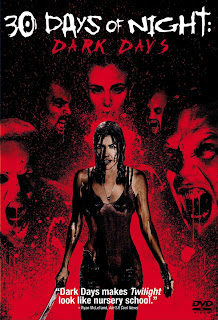 30 Days of Night: Dark Days is tragic raping of a good movie‘s name and story. This is a direct to dvd, sequel to 30 Days of Night. This calamity stars Kiele Sanchez (A Perfect Getaway), Rhys Corio (MacGrubber), Diora Baird (My Best Friend’s Girl), Harold Perrineau (The Matrix Revolutions) and Mila Kirshner (The Black Dahalia).
After surviving the incidents in Barrow, Alaska, Stella Olemaun relocates to Los Angeles, where she intentionally attracts the attention of the local vampire population in order to avenge the death of her husband, Eben. (Imdb.com)
30 Days of Night: Dark Days is a dismal, rip off of the first movie. This sequel suffers from more than just a lack of funding. This film rapes, ravages, and butchers the story of the first movie. The movie opens well with an interesting beginning of the plot as it picks up right from the end of the first film but the movie quickly changes just another bloody action flick. The film races through too many of the small details to progress the action portion of the film. This makes the film more superficial and it causes the film to lose plausibility and the continuity to support the story.
There are many flaws to this film outside of the budget. First, the movie shouldn’t even be called 30 Days of Night as the story has now moved to LA. The whole premise of the first movie was the setting in Alaska, without that, we lose one of the biggest obstacles for the victims. Next, Stella, now portrayed by Keile Sanchez instead of Melissa George, goes from being a “damsel in distress,” to a bad ass in a matter of minutes. This character change was too rapid and too big to be believable. The supporting actors were worthless. Not one of them are even worth mentioning, except for Mila Kirshner. The vampires in this one barely seem like the same from the first movie, with the exception of their appearance they are nothing like the originals. These are more human as they blend with society extremely well, the one’s in the first movie were more primal. There’s no terror in this movie as the first movie did a terrific job at building suspense and did a good job at trying to scare the audience. This movie doesn’t even come close. Finally, the climax and ending were the worse things of all. Both are equally unsatisfying and not even worth going into detail about.
“Dark Days” does possess a few good aspects that builds on the first movie. The opening of the film with Stella’s reflection and trepidation about her experience in Barrow is excellent. The movie’s beginning does a good job at expressing Stella’s feelings from the experience. Mila Kirshner does a good job as Lilith, the Vampire Queen was a surprisingly pleasing addition to the movie. The movie builds the character very well and does an effective attempt at interweaving her into the storyline. Mila Kirshner’s depiction of Lilith is done pleasantly and is well placed within the frame of the story.
30 Days of Night: Dark Days is a lackluster shadow of the first film. It does almost nothing to enhance or extend the story of the first film. It simply tries to capitalize of the success of the first film. It is an unsatisfying plundering of a good story. It had a few redeemable qualities but they weren’t nearly enough to save this travesty and were quickly abandoned in hope to amp of the blood and violence. Nearly everything done is this film discredit’s the good aspects of the first film. If you watch this then you have no reason to even mention this movie to anyone. Watch the first one and never even consider this one as it will only infuriate you by the end of it.
Posted by Da'Mon at 6:21 AM