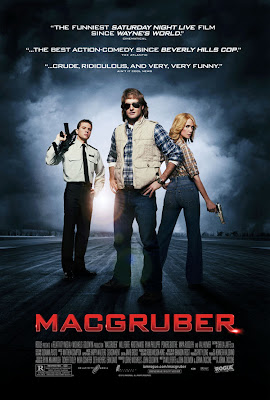 Rating:
*
By: Da’Mon Guy
MacGruber is a ridiculously dismal, tasteless, stupor of a comedy based on a on a short created on Saturday Night Live that was inspired from a 1980’s television show named MacGyver. This travesty stars Will Forte (The Brothers Solomon), Kristen Wiig (Extract), Ryan Gosling (Breach), Powers Boothe (Sin City), and Val Kilmer (Deja Vu).

A nuclear warhead has been stolen by a terrorist. The government recruits an ex CIA agent, whose wife was killed by the same terrorist, to stop him.

MacGruber is a parody based on the 1980’s TV show MacGyver but the movie version of the SNL short filters in aspects from other great action movies. Like most parodies, there is a level of stupidity that is expected, this one is no different but MacGruber exceeds the expectation level by leaps and bounds. This movie was absurdly dumb to the point of being offensive. Despite this being a parody, it was downright awful, unfunny, and insulting.

MacGruber contains an extremely limited amount of aspects movie that could be considered funny. The character of MacGruber (Forte) is a foul-mouthed near-deviant, who isn’t even funny as he has no limits to what he will do or say within the movie. I was irritatated the longer I watched this him on screen. MacGruber’s car and radio was faintly amusing. He drove around in a red Miata with a pull out car stereo (the entire radio) playing 80’s music. The only other slightly amusing scene in the entire film was the coffee shop incident with Vicki St. Elmo (Wiig) when she was wearing a wire. The rest of the movie was absurdly dumb. The sex scenes with MacGruber were way over the top and weren’t even close to being funny. Too many of the supposedly funny scenes push the bounds of taste then fall completely flat.

MacGruber was easily one of the worse movies that I have ever seen. Probably in the top two. There is absolutely nothing in this movie to be remotely positive about. I can’t even begin to comprehend how or why this movie was made. I barely laughed the entire movie. It was horrible from start to finish. MacGruber is a movie that goes from bad to worse to downright unbearable. This film was so pitiful that it’s hard to imagine how I sat through it. This movie was so awful that I am extremely upset that I spent a dollar to rent it. I would love to permanently maim everyone responsible for the creation of this film.
Posted by Da'Mon at 6:20 AM