Brooklyn's FInest:" A Performance Driven Showcase About the Perception of Morality" 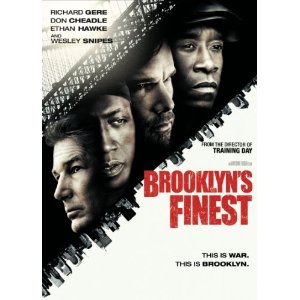 Rating:
****
By: Da’Mon Guy
Brooklyn’s Finest is a gripping, performance driven, showcase that questions conscience, morality, and the decisions that blur the lines of right and wrong. The film exhibits the talents of Don Chedle (Iron Man 2), Richard Gere (Amelia ), Ethan Hawke (Daybreakers), and Wesley Snipes (the Blade trilogy) and is directed by Antoine Fuqua (Training Day).

In Brooklyn, amid drug deals, violence, casual racism, poverty, housing projects, and corrupt cops, the movie follows the lives of three police officers and the choices they make that shapes their lives.

“Its not a matter of right and wrong, it’s a matter of righter and wronger.” Brooklyn’s Finest opens with these words and this is the overriding theme of the entire film. The movie applies these terms to the situations of a trio of officers in three different departments of the NYPD as each of them are confronted with the difficult tasks of upholding the law.

Brooklyn’s Finest is packed with excellent performances. All of the main characters of the story are portrayed exquisitely. Chedle, Snipes, Hawke, and Gere are each at their best as they show us the lesser known side of the lives of a police officer. None of the police officers interact, with the exception of Tango (Chedle) and Cassanova (Snipes), the other characters are not connected nor do they know one another. Their paths rarely intersect within the movie with the exception of the occasional brush by.

There are a number of scenes where there are challenges of morality. The movie profoundly exhibits each characters constant battles with their conscience. Sal (Hawke) has a very moving scene were he is in confession, the priest asks does he want God’s forgiveness and Sal says “I don’t want his forgiveness, I want his help.” this is a prime example of the challenges of morality that each character in Brooklyn’s Finest faces.

The movie offers a more realistic perspective on three different, distinct aspects of life that face these police offers. Each one is bound by a different, trying, aspect of everyday life that all people have experienced. Family (love), Friendship (loyalty), and self preservation (duty) are just some of themes that are addressed within the movie.

If you watch Brooklyn’s Finest with the expectation that this is similar to New Jack City, King of New York, or Carlito’s Way then you will be disappointed. Brooklyn’s Finest is none of those. It’s as good as all of them but in it’s own way. This is more like Traffic or Crash but set in the midst of a crime setting. What Brooklyn’s Finest is, is a movie about perspective and morality. This movie is more about the tough choices that police face and how each day of the job is an opportunity for them to question their morality. This is a film about hidden truths not the glamorous side of the police but the hard choices that questions each one of them. This movie divulges into how slim the line is that separates someone from being the hero or the villain in the eyes of every individual based upon perception and choice.

I really enjoyed this movie. It was extremely different than the usual police film. Every situation in this movie is a chance to question one’s morality and then it offers each character a choice. This allows the audience to judge each of the characters choices based upon our own interpretation of morality. Does the end justify the means? This is what this movie asks us and then it ends with leaving us with the same words than it began with “Its not a matter of right and wrong, it’s a matter of righter and wronger.”