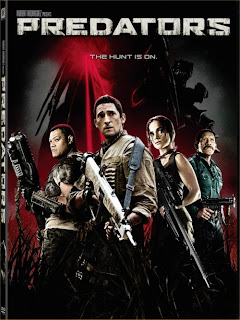 Predators is the latest action-packed iteration in the continuing saga of the alien hunting race known by only one name, the Predator. The movie boasts a talented cast consisting of Adrien Brody (Splice, King Kong), Alice Bragga (Repo Men, I Am Legend), Toper Grace (Valentine’s Day, Spiderman 3), Danny Trejo (Machete, From Dusk till Dawn) and Laurence Fishburne (The Matrix Trilogy, Armored).

A group of mismatched individuals awaken to find themselves on a strange planet. Each one of the individuals comes from different backgrounds but have one thing in common, they all have preyed upon human life at one point or another. Royce (Brody), a mercenary, unwillingly becomes the leader of this mismatched ban of slayers that is forced to ban together in order to survive. They soon realize that they are being hunted by an alien species.

Predators is the latest movie in the ongoing series of films containing a character that originated in the movie Predator in 1987. This latest version boasts the same concept as the original. The film is very enjoyable on an extremely superficial level. It’s big, bold, and jam-packed with action. It’ll make every adrenaline junkie very happy. The film moves at a fast pace right from the outset as the action scenes come fast and in bunches. However, the main detractor to this movie being entitled, Predators, is that we never see more than one Predator on screen at a time -- except in the climax. Another flaw with the Predator movies is that, given the nature of characters, they garner so little screen time. This means the rest of the characters must carry the film and that’s where this one comes up short.

Predators is not a movie about compelling performances. This is a movie about action and killing. However, it does contain some commendable performances and one stand-out performance. The Predator character doesn’t need too much skill to depict it, but to offset the limited screen appearances by it, the character opposite it should be someone that we want to stand and cheer for. This film lacks that character which is one of the factors that add to the demise of the it. Adrien Brody’s character of Royce is supposed to be a bad ass. It’s a throwback character to the classic 80’s characters portrayed by once great action stars like Arnold Schwarzeneggar and Sylvester Stallone. It was written to be that kind of character but Brody is not the actor that can accomplish it. He does an above average job, but I find it hard to believe that Brody was the best choice to play him. Adrien Brody has never been much of an action star. He is a very good character actor given the roles that he’s portrayed up to now. In the age of limited action stars, we have to settle for Brody’s depiction of Royce. This character would have been better served if they’d cast someone like Vin Diesel, Dwayne “the Rock” Johnson, or Sam Worthington. Topher Grace offers a commendable performance as Edwin. He’s was highly convincing as a two faced killer. Laurence Fishburne's performance makes the movie worth while even though his screen time is limited. His portrayal of the psychotic Nolan was by far the best in the film. His limited screen was a disservice to the audience. I loved every minute that his character was in the movie.

Predators offers very little originality as it is basically the same movie as the first Predator. The plot has merely been updated with too many of the scenes from the original movie being transposed into this one. This movie pays homage to the original with not only the look of the film but with many things factored into the story. However, in many ways it pays it too much respect causing it to infringe upon the originality of this one. I, personally love when updated movies or sequels connect themselves to a prior incarnation. Conversely, Predators loses itself in the process of trying to connect the two films.

I really love the original Predator. That was why I had high hopes for this one. My ongoing love of the first movie also adds to my ambiguity in rating this movie. On the one hand, I loved the fact that they tried to pay homage to the first movie, but in the same regard it doesn’t add or extend the series in any way. My biggest issue with this film is that the creators of the film never divulge the origin of the Predators. The characters originated in 1987, 23 yrs and 5 movies later, we know no more now than we did when the first movie premiered. Somewhere in the process, they should have given us some details about the characters origins or their motives in becoming what we witness on screen. I liked the movie but I don’t love it, it had so much promise but provided us with so little satisfaction. In spite of this, I would recommend it as a good action movie can cure any boring night at home.