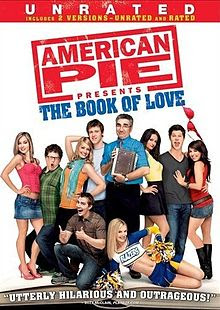 American Pie Presents: The Book of Love is the seventh and most recent disappointing installment in the American Pie series of movies. This depressing waste of time features Eugene Levy (American Pie) who makes his usual appearance in the franchise’s films. He is joined by a cast of virtual unknowns such as Bug Hall, Kevin Horton, Brandon Hardesty, Beth Behrs, Melanie Papalia , Jennifer Holland, and John Patrick Jordan.

The Book of Love does have a few very limited situations that were very humorous. Rob (Bug Hall), in the Jason Biggs role, was constantly being caught in compromising situations that ended up on video tape throughout the movie. These situations were continuously placed on You Tube to embarrass rob. Secondly, there was the panty theft incident and then the old hooker who dies while giving a blow job. Aside from those, it has almost nothing to laugh at. The Book of Love simply just ups the raunchiness in an attempt to make a quick buck.

The cast of The Book of Love is completely disposable as is the rest of the story. None of them are even worth mentioning as they are just components to express the limited comedic sequences. The recurring role of “Stifler”, which is a constant role and necessary component of the series, was no where near as entertaining in this incarnation as in the prior installments of the American Pie series of films. John Patrick Jordan is clearly not up to the task as he lacks the charisma that Sean William Scott brought to the role so many years ago.