The Experiment: "A Little Known Secret that Needs to be Shared" 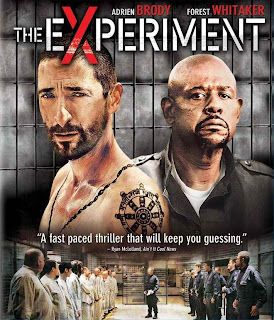 The Experiment is a direct to video remake adapted from a German movie called Das Experiment that was released in 2001. Both films are based on a book that was inspired by the real-life events that occurred at a Stanford University’s study of a prison experiment in 1971. A group of 26 men volunteer for a two week behavioral psychological experiment. The Experiment involves study of aggressive behavior in a closed environment that quickly escalates to the point of being out of control.

The movie begins very slowly but it quickly gets better once the experiment begins. At the beginning of the examination, all of the men are taking away into an isolated facility. Upon their arrival, they are made aware of the guidelines for the test, and that because of the nature of it, some of them may lose their civil rights during the experiment. The participants agree to the experiment and are divided into two parties, the prisoners and the guards. Both of the groups are advised that there is no violence of any form is allowed in the study or it will end by a red light buzzing. They are also informed that if the experiment ends then no one gets paid. The Guards, however, are given a second set of rules that they are supposed to use to govern the prisoner without the use of violence. They are also told that they must maintain order or the experiment ends and no one gets paid.

The film contains a very solid story that is highlighted by a quartet of really quality performances. Forrest Whitaker, Adrien Brody, Clifton Collins, and Cam Gigandet all give solid performances in the movie. Forrest Whitaker’s portrayal of Burris is the best of the movie. His depiction of the power drunken Burris Whitaker’s dark transformation of Burris is the driving force of the movie. Whitaker did a first rate job at convincing the audience of Burris. Burris power trip was complete when he got an erection after his first taste of power as he handcuffed and humiliated Travis. Gigandet’s twisted portrayal of Chase was manipulative and his cruelty matched Burris’s as he was the one to first embellish the role of power inciting the other would be guards to do the same. Brody’s character of Travis was an excellent off set to Whitaker’s Burris. Brody did a first rate job at conveying Travis’s multitude of emotions and the constant battle he had within himself as he tried to avoid a violent response to being constantly degraded and continually tested. Clifton Collins, Jr adds a good performance in his limited appearances as the ex-con Arian, Nix.

The film is very entertaining but it does have some shortcomings. The biggest problem is the lack of details about the main characters. The movie barely reveals enough about Travis (Brody), Burris (Whitaker), and Chase (Gigandet). Nix (Collins) never has anything revealed about his background accept for a quick verbal assessment by Travis who notices his tattoos. We get a scene or two about them and maybe a line or so in dialogue about each them. The movie never discloses enough about the main characters to help to understand what motivates the rapid behavior changes that each man, especially the guards, undergoes during the experiment. The second is the experiment itself. The film never explains why the experiment was being conducted. This would make more sense if we knew why some corporation was willing to pay these mean an obscene amount of money, $14, 000 each, to watch them kill one another. The third shortcoming is the scientist themselves are never shown. One is shown at the beginning of the movie and before the men enter the experiment begins and then he’s never seen again. Not even at the end of the movie. That exclusion hurts the climax of the movie.

The Experiment is violent and very graphic. It is also a very good movie that questions one’s moral compass and human nature. The film is filled with some really good acting. I really enjoyed this movie. I absolutely loved watching Forest Whitaker as his dark performance drove the movie. The movie had a lot of inconsistency but not enough to hinder the enjoyment of the movie. The end of the movie was a little unsatisfying as too many details were left out which made lose value. In spite of that, The Experiment is a definite watch for anyone who enjoys a good movie.
Posted by Da'Mon at 6:31 AM