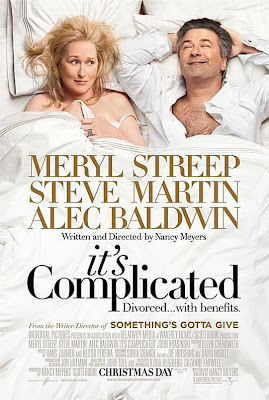 
It’s Complicated is a charming, slightly different, approach to the romantic comedy genre. The movie blends together the talents of Meryl Streep (Mamma Mia), Alec Baldwin (My Best Friend’s Girl), John Kaminski (Leatherheads) and Steve Martin (The Pink Panther 1 & 2). The movie was written and directed by Nancy Meyers(Something’s Gotta Give).
Jane Adler (Streep) is a romantically deprived divorcee at a crossroads in her life. She runs a successful business, has three grown children, and has a really good set of friends. What she doesn’t have is a romantic interest since her divorce. Taking the advice of her close friends, Jane decides to have an affair with a married man. This married man turns out to be her ex-husband.

It’s Complicated is a enjoyable comedy that uses an older cast for the usual comedic love triangle. This approach gives the genre a slightly different approach than usual. This is a formula that the director, Nancy Mayers, has tried before and had some level of success (As Good as it Gets) but it works much better in this movie. This approach causes this movie to be slightly fresher as many of the comedic scenes feel new and not just more of the same as in too many of today’s romantic comedies.

It’s Complicated is a couple of different movies rolled into one. It’s starts as your sobby, man bashing, chick flick where most men who watch this film will begin to lose interest. The scenes with Jane and her girlfriends were too “chickish.” They were a complete turn off. They could’ve easily cut those down or even out. Next, it’s a more sensible family movie as we see Jane’s strength and perseverance after enduring a tough break up leading to divorce. Finally, it becomes a really good romantic comedy involving a love triangle between Streep, Baldwin, and, Martin.
All three of the stars had really fine performances as they blend and compliment one another very well. Streep and Baldwin were great on screen together. Their scenes were both very enjoyable and amusing. Steve Martin also was really nice. His performance was more laid back than usual but it was a great off set to Alec Baldwin’s more manic character. Baldwin, Streep, and Martin formed an enjoyable love triangle as each one brought something different but entertaining to the movie. Streep and Martin’s weed smoking incident was one of the best scenes in the film. John Kaminski gives an admirable performance as Harley, he stole many of the scenes as Streep’s son in law.
There was a really good feel to this movie. I really liked Streep and Baldwin’s chemistry. Their performances were likable and funny. In the outset, the movie begins really too feminine, almost to the point of being unbearable for some men. The first 20 minutes or so could have been cut or altered. It was almost enough to turn me against the film. The scenes with Streep and her girlfriends were useless. Conversely, the film does get much, much better. Streep’s character of Jane wasn’t a character that everyone could like in the beginning of the film. At the start, she was just some sappy, “goody too shoes,” divorcee. But once the affair starts you start to like her and then the real fun of the story begins as the love triangle takes shape and the movie progresses. The movie had a very predictable ending but it was enjoyable regardless. It’s Complicated is definitely a movie worth seeing. It makes for a really good couples movie. Not something that I would have suggested to see in the theaters but it is a great dvd to add to your library or to rent if you want to have a movie night.
Posted by Da'Mon at 8:01 AM