DC Comics Showcase presents Superman vs Shazam: The Return of the Black Adam: "An Entertaining Updating of a Classic Charater's Origin" 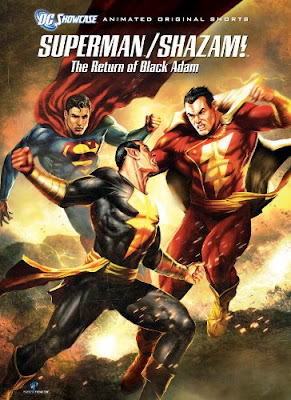 Rating:
***½
By: Da’Mon Guy
Memorable Quote:
“I fight for those who cannot fight for themselves.”

The Return of the Black Adam is an extremely enjoyable animated short that updates of one of DC comics lesser known heroes, Captain Marvel. This latest animated feature modernizes his origins. The short is also a first-class showcase for another of DC comics lesser known characters, the formidable villian, The Black Adam. Superman makes a guest appearance in order to bring a mainstream audience’s attention to the animated feature. Billy Batson acquires his powers from the wizard, Shazam. Young Batson transforms into the mighty Captain Marvel when he speaks the name of the wizard who gave him his powers, Shazam. The Wizard's name "Shazam" - is an acronym from the initials of the deities who gave the protectors their powers. For Billy Batson the gods are Solomon (wisdom), Hercules (strength), Atlas (stamina), Zeus (power), Achilles (courage) and Mercury (speed); and for Black Adam it's the Egyptian gods Shu (stamina), Heru (speed), Amon (strength), Zehuti (wisdom), Aton (power) and Mehen (courage).

The Return of the Black Adam is very exciting as the action begins almost as soon as the story does. The Black Adam boldly leaps into the narrative as he tries to kill his would be replacement, Billy Batson. The battles quickly ensue as the Man of Steel swoops in to thwart his efforts. The physical confrontations are big and bold as you witness the limitless physical abilities of all three combatants. The all powerful combatants clash using their immense power to clash, using the entire city and the air above it as their battlefield.

The short exquisitely blends the child like feel of Captain Marvel’s alter ego, Billy Batson, into the progression of the story. The child like innocence of his personality is present throughout the animated feature as it adds enhances the story giving it a light hearted approach. It also very human element into the story and is a great contrast to Superman’s more serious character.
The dvd is comprised of a list of shorts highlighted by this one. The others contained on the disc are Jonah Hex (previously released with Batman: Under the Red Hood), Green Arrow (previously released with Superman/ Batman: Apocalypse) and The Spectre (previously released with Justice League: Crisis on Two Earths).

I really enjoyed DC comics Showcase presents Superman vs. Shazam: the Return of the Black Adam. This short was better than the last animated feature, Superman/ Batman: Apocalypse. The short’s length is a its biggest detractor. The short appeals to all ages as it has an appealing story. It’s also stockpiled with enough action to keep any adrenaline junkie satisfied. The length of it is a real tease as it is only one of a collection of shorts. I would readily recommend this as it is very good viewing but not to buy at the price. It’s not worth the $20 that it costs and the other shorts are already released on other DC animated features. However, if you haven’t seen the others then the DVD is definitely worth the money as all of the shorts are very good.