The Disappearance of Alice Creed: "The Little Movie that Could" 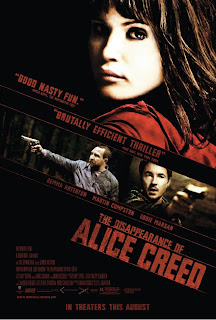 Rating:
****
By: Da’Mon Guy
The Disappearance of Alice Creed is an intriguing thriller full of deception, betrayal, mistrust, greed and love. The film premiered in limited release in 2010. The movie features Gemma Arterton (Prince of Persia), Eddie Marsan (Sherlock Holmes), and Martin Compston.

Two ex cons kidnap the daughter of a millionaire. They lock her in a fortified apartment and hold her for ransom. As the story progresses, nothing is as simple as it seems.

The Disappearance of Alice Creed is a British movie that premiered in limited release in August of 2010. It’s a surprising suspense thriller that will keep you guessing as to what will happen next throughout the course of the movie. The opening of the film aptly exhibits the detailed, meticulous preparation of the two kidnappers for the abduction. These cold, calculating, steps quickly trigger an emotional response as the audience bares witness to these sinister acts. After watching the two of them, it instantaneously desensitizing the audience, erasing any apathy for the two kidnappers. Conversely, this immediately establishes an instant level of sympathy for the victim. The movie really emphasizes many of the details of the kidnapping to establish the look and feel of a kidnapping.

The Disappearance of Alice Creed progresses just like a short story. It gives you just enough details to peak your attention but never too much to spoil the suspense in the process of raising the audience’s anticipation for the next twist in the plot. The movie moves at a terrific pace. Each scene cleverly reveals a small detail that builds a level of anticipation for the next one as it eloquently intertwines the details with the unfolding action of the story. The movie’s only detractor is that it doesn’t clearly give too much insight into the background of each character other than a brief verbal exchange about each. However, this approach adds to the suspense of the film but it hurts the end as we never truly understand any of their motives.

The Disappearance of Alice Creed is comprised of three very good quality performances. Arterton as Alice, the kidnap victim, portrays the role masterfully as the audience can feel the gambit of emotions that she delectably depicts in the movie. Martin Compston gives as equally compelling performance as the seemingly conflicted Danny. His character was at the center of the film and Compston gives a skillful performance that is both sinister and sympathetic simultaneously. Finally, Eddie Marsan (Vic), rounds out the trio of good performances that drive the movie. Marsan depiction of Vic, mirrors the opening of the film. Cold, calculating and ruthless. His evil performance is the foundation for the film. The movie contains three very flawed tragic characters. This adds to the reality of each. Each of the characters emotionally driven and bound to one another by the circumstances. They each underwent a specific change by the end the film that alters your initial perception of each of them. The film involves one of the most interesting plot twists that you’ll ever see.


The Disappearance of Alice Creed is not your normal kidnapping movie. It’s a very cleverly written thriller that will hold your attention and then surprise you through out. Nothing is as simple as it appears with in the movie. It contains an interesting twist that is the film’s real strength. This movie will definitely surprise you as it is not what it appears to be from the outset. I really enjoyed The Disappearance of Alice Creed. I didn’t know what to expect from this movie. I heard that this was a really good movie and it was much better than I had expected. It is one of the better films that I have seen this year. It was both captivating and entertaining. The movie is a real delight as I would certainly recommend this to anyone who wants a enjoy a good movie.
Posted by Da'Mon at 8:06 AM