SANCTUM: "An Insideous Waste of Potential" 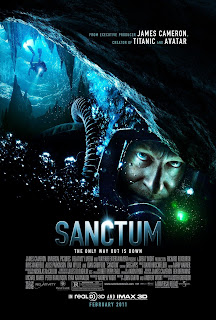 ﻿
Rating:
**1/2
By: Da’Mon Guy
Sanctum is a disappointing, moderately entertaining mishap about a group of cave researchers that become trapped. The film is comprised of first rate cinematography that is heinously interconnected with a second rate story. This is the cruel manifestation of their courageous effort to escape the unfortunate circumstances that fate has tried to deal them. The film stars Richard Boxborough (Legends of the Guardians: the Owls of Ga‘Hoole), Ioan Gruffudd (Fantastic Four 1&2), Rhys Wakefield (Broken Hill), Alice Parkinson (X-Men Origins: Wolverine), and Dan Wyllie (Animal Kingdom).

A team of cave explorers become trapped during an expedition to uncover the secrets to one of the least explored and least accessible cave systems in the world. It becomes a life threatening crisis as air and supplies are limited. The film is inspired by true events. This is the story of how they try to escape. 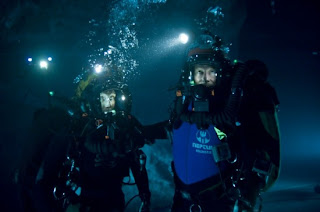 Sanctum is a flim that is a great example of wasted potential and resources. The film had a number of promising positives that could've made it a really good film but it completely squanders it. The film fails on a number of levels but the main issue is that it doesn’t establish the connection with the central characters well enough for it to succeed. Sanctum is a jumbled catastrophe that moves to fast without enough character development to garner the emotional response needed for this type of movie. We never truly care for any of the characters involved. Hence, once the characters begin to face the perils that they must overcome to survive, we are completely uninterested. Nearly all of the characters that comprise the film are disposable. None of the supporting characters are even worth mentioning as most of them are killed within minutes of the initial beginning of the crisis. 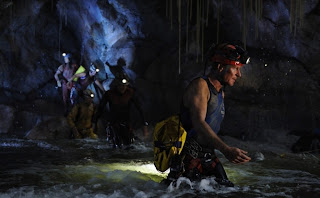 The only reason to watch this movie is the cinematography. It’s the only aspect that is remotely positive about Sanctum. The film is an excellent example of great cinematography. The visuals complete outdo any aspect of this evil charade. The caves are fantastic as well as the underwater scenes. The use of 3D makes the cinematography more amazing. The camera places the audience right in the middle of the crisis. You literally feel like you are in the film. In spite of the spectacular visuals, the story doesn’t compliment the film enough to give the effect that it could’ve had. Great visuals but not enough to justify the enduring of this botched endeavor. 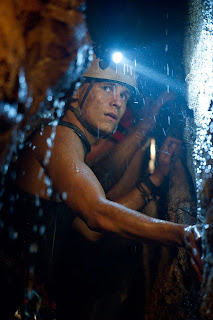 There is a touching story deeply rooted in this bungled effort. The story of a relationship between an estranged father and his rebellious son who discover one another in the midst of this series of unfortunate events. Their dysfunctional relationship is the central focus of Sanctum. Josh (Wakefield) and his father are at odds from the outset. Frank (Roxborough)
is a driven, uncompassionate man whose only concern is the exploration of the caves. He’s never had time for his son or anything but the furthering of his career. Josh is the stereotypical, rebellious son who is the exact opposite of everything that his father his, unfocused, compassionate, and exhuberant. The two share a number of touching moments as the movie progresses but it’s regrettably mismanaged. When Frank finally opens up to Josh to share his shortcomings as a father, the impact is not as powerful as it should've been because of the film inability to force us to have a level of sympathy for the characters. If these two characters were better established then this story could’ve truly become something special. The revelation by Josh at the end of the film would’ve have solidified the losses during the course of the film. 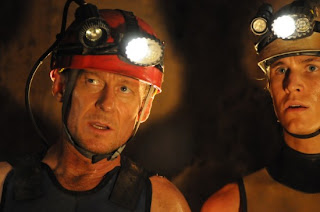 Sanctum is a mediocre, less than stellar, second rate survivor story.
It is very reminiscent of another film of a similar nature, The Descent. Sanctum, however, is of a slightly different nature as it doesn’t have the same horror premise as The Descent but it is completely mishandled as it isn’t anywhere close to be as enjoyable as The Descent. Sanctum’s mismanaging of the characters prevents this movie from being anything more than a glorified waste of time and resources. No need to continue on about this or for anyone else to endure the torture of watching it.
Posted by Da'Mon at 10:34 AM