I SPIT ON YOUR GRAVE: "An Explicitly Graphic Tale of Revenge, Redemption, & Salvation 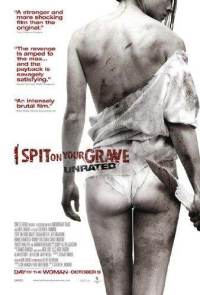 Rating:
***
By: Da’Mon Guy
I Spit On Your Grave is a moderately entertaining, brutally violent, extremely inhumane film about revenge, redemption, and retribution. The film is an inciting, thought-provoking tale that will assuredly spur a number of emotional responses. This wicked story of vengeance is comprised of a cast of mostly unknowns. It stars Sarah Butler (Flu Birds Horror), Jeff Branson (Shaft), Andrew Howard (Transformers 2), Daniel Franzese (War of the Worlds 2005), Rodney Eastman (Rule of Three), Chad Lindberg (The Fast and the Furious), and Tracy Walter (The Manchurian Candidate).

A young woman on a cabin retreat is viciously raped and left for dead, she miraculously escapes, and then survives. She then returns to take revenge on her attackers. 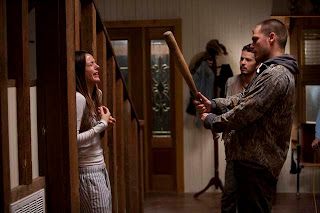 I Spit On Your Grave is the horrifying, atrocious remake of a 1978 film of the same name that became a cult classic. The new film is a direct to video incarnation of the prior version. This is basically an “updating” of the original film as it contains many similarities, including the plot, and some character names, as the original. However, it does build on it significantly. The biggest difference is that in the latest version, there are five attackers and not four. The acting and dialogue are significantly better as well. However, as with most remakes or re-imaginings, this one antes up the brutality, the violence, and torture.

The film is a viciously callous, heartless story of salvation, retribution, and reckoning. The underlying theme to this horrific narrative is that the story is really about power and the transference of power. Jennifer Hills (Butler) is atrociously tormented, humiliated, and then repeatedly raped by five men. She survives and then narrowly escapes. Jennifer returns to exact vengeance on each one of them, systematically hunting them down one by one. Jennifer begins implementing the same level of humiliation leading to torture to execute her revenge on each one of them. 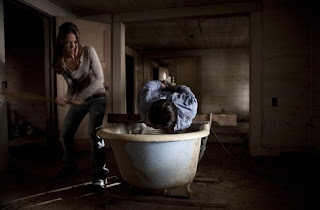 The raping of Jennifer is utterly heinous, graphic and extremely violent, however, the torture that Jennifer returns to exact is more violent and even borderline sadistic as she confronts each man. Jennifer returns to have a reckoning with each of her assailants, causing each to relive the moment, but as the victim. She sarcastically reminds each man of the twisted pleasure that they found in their role of raping her while she maliciously tortures each one of them. The film is a tale that will stimulate a number of emotional responses. It is a contemplative tale that forces you to question the nature of the revenge once she invokes it upon each of her assailants. Is she justified? Is there a such thing as too much revenge, especially given the circumstances that led to Jennifer’s revenge? Do the ends justify the means? 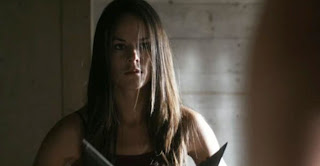 I Spit On Your Grave is a tale filled with malevolence, violence, and torture. The film contains a malicious, merciless rape scene and then it features some of the most callous, insidious acts of revenge and torture that you will ever bear witness to. One should only watch this if you have a strong stomach and high tolerance for graphic violence, as this film will test your conviction and endurance. The movie isn’t a classic and one should question why the original had such a cult following, but it is an inciting watch, if you can stomach it. This is not a movie for the weak of heart.