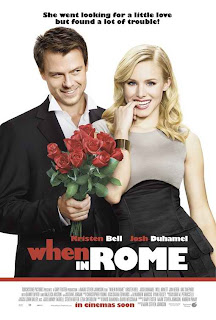 When In Rome is a lighthearted, entertaining, approach to the age old question of trying to find one’s “true love.” The movie stars Kristen Bell (Couples Retreat) and Josh Duhamel (Transformers 1&2). The movie is filled with an all star ensemble supporting class that features the talents of Danny Devito (Be Cool), Dax Sheppard (Let‘s Go to Prison), Jon Header (Blades of Glory), Will Arnett (Semi-Pro), Anjelica Houston (Martian Child), and Don Johnson (Guilty As Sin).

On a trip to Rome to attend her sister’s wedding, an unsuccessful with love young woman decides to take the coins of men that are seeking true love from a magic fountain. The coin removal causes the former owners of the coins fall under a spell and in love with her.

The film is full of comedic situations that are enjoyable. It’s not “knock your socks off funny,“ but it is entertaining. Kristen Bell (Beth) and Josh Duhamel (Nick) have really good chemistry on film. Both are very likable and entertaining on screen together. Both of them added their own touch to the comedic aspect of the film. Duhamel character's clumsiness and bad luck was a pleasant humorous touch.

The real strength of the movie is the quartet of enamored lovers and their pursuit of Beth is very comical. Heder, Sheppard, Arnett, and Devitto’s misguided attempts to woo Beth was the best part of the film. Much of it is somewhat ridiculous but each of them are funny. The downfall to many of the situations is that each of them are very brief, almost a little rushed, because as soon as one comedic exchange ends the film quickly rushes Beth to the next encounter with another would be suitor. This hurts the effect of each of the scenes.

When In Rome makes for a good home viewing for the family or a couple as it focuses on romance and love. It’s good viewing that everyone can relate to. It’s not too “chicky” as the comedic situations balance the movie very well to make it amusing for men. Couples as well as families can be entertained by this film. The climax and end of the movie had a pleasing, warm touch to it. It contained a every touching message about true love as all of the enchanted suitors put their desires aside to aid Beth in her pursuit of true love. That enhanced my enjoyment of the it. The film isn’t a must see movie but it is more than entertaining enough to offset a boring night at home.
Posted by Da'Mon at 8:05 AM