Death Race 2: "A Moderately Entertaining Prequel that Continues the Auto Carnage that Began in the First Film" 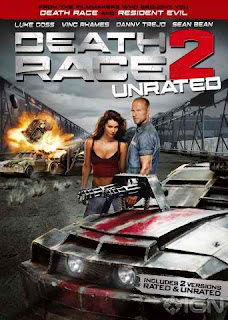 Death Race 2 is a sequel to the 2008 version of Death Race. This is the third film to bear the “Death Race” name. The first premiered in 1976 under the name of “Death Race 2000.” The second was the the 2008 film was a remake of the 1976 movie and the one that this movie is based upon. This movie is a prequel that establishes the beginnings of the brutal, violent race and the origin of the heralded driver, Frankenstein. Frankenstein was the fabled driver that Jason Statham’s character, Jensen Ames, replaced in the most recent Death Race film. This follow up returns a few of the same cast as it aptly fills in some of the mystery that sounded the rise of the illustrious driver, Frankenstien. 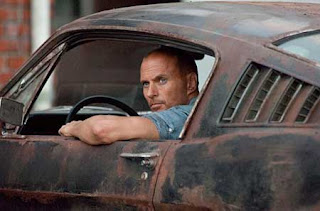 The film is one of the rare direct to video features that actually does some credit to the motion picture original. The film has the look and some of the feel of the first film. It expands on the story of the first one. Conversely, the story is too rushed as much of the first half of it hastily whisks through the details of it to get the actual Death Race. This muddled action tale does manage to explore some key aspects that were briefly mentioned in the first film.

This direct to video feature introduces some new characters into the storyline as well as returning some of the familiar faces from the first one. Luke Goss takes charge of the film as Carl “Frankenstein” Lucas. Goss does a believable job as the talented but doomed driver. Goss's shortcomings in the film are more about the script than his acting. The character of “Lists” (Koehler) returns in this muddled prequel. List was one of the key characters from the 2008 Death Race. He does have a larger role and this version expands on the fondness that Lists had for Frankenstein in the prior film. Katrina Banks (Phoenix) as the vicious but ambitious creator of the races was a good addition to the series. Sean Bean and Ving Rhames also do their respective parts to add to a less than stellar script. 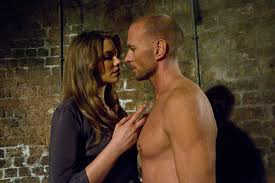 The action of the film is the highlight of this. The action sequences are moderately impressive as the races were recreated. All of the cars from the prior film make an appearance but nearly all of them are driven by new drivers with the exception of 14k‘s (Shou) car. The creators of the this prequel uses the same sets and cars to tie it back to the original. The races are as entertaining and brutal as the prior.

The biggest detractor from this is the pace of the it. The film also suffers in the dialogue. Much of it feels cheesy and poorly written. The script is too rushed and tries to tie everything up too quickly. This causes the movie to feel rushed. In addition, the film’s use of slow motion sequences during the action of film were overused and unneeded. They were a clearly a detractor that hindered some really good cinematography. 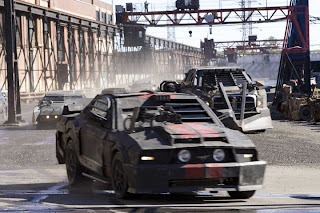 Let’s face it. This is a film about action if nothing else. Death Race 2 won’t wow you. This is a direct to video film that will not excite nor will it disappoint you. If you seen the first then you can enjoy this without some preconceived, extremely high expectations. The film does just what it’s about. It gives some mildly enjoyable action, a manageable level of brutality, with some violence thrown in. Nothing more, nothing less. It makes for a satisfactory watch to satisfy a boring night on the couch.
Posted by Da'Mon at 6:29 AM