Easy A: An Entertaining, Light Hearted Showcase of the Power of Words 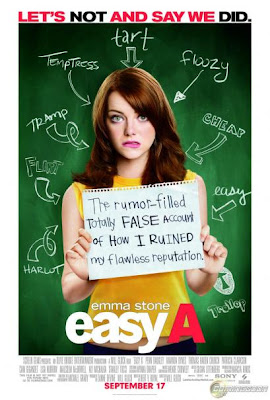 Easy A in an enjoyable, lighthearted, heartfelt story that comically addresses the power and consequences of words. The movie is highlighted by witty dialogue and comedic interaction between the characters. The film features an impressive performance by Emma Stone (Zombieland) with a talented ensemble cast that includes Penn Badgley (The Stepfather), Alyson Michalka (Bandslam) Amanda Byenes (She‘s The Man), Stanley Tucci (The Lovely Bones), Patricia Clarkson (Shutter Island), Thomas Hayden Church (Spiderman 3), Cam Gigandet (The Experiment), Dan Byrd (The Hills Have Eyes), Lisa Kudrow (P.S. I Love You), and Malcolm McDowell (The Book of Eli).

After a little white lie about losing her virginity gets out, a clean cut high school girl sees her life paralleling Hester Prynne's in "The Scarlet Letter," which she is currently studying in school - until she decides to use the rumor mill to advance her social and financial standing. (Imdb.com) 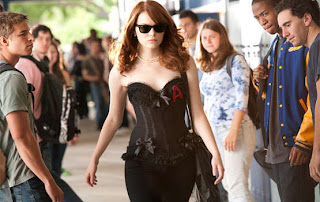 Easy A is an entertaining, jocular teen comedy that is very reminiscent of classic 80’s comedies like The Breakfast Club and Say Anything. The movie comically confronts many of the various recurring issues that face teenagers of each generation. It also showcases how every choice has a consequence. The movie’s light hearted nature doesn’t detract from the significance or the levity of the messages that are embedded within its humorous nature. The film speaks volumes about many issues such as social acceptance, self perception, the effects of lying, the power of gossip and last but not least, sex. The movie is an excellent exhibition for all them.

Emma Stone delivers her best performance to date as the excessively sarcastic Olive Pendergrass. Stone nails the performance. The depiction is so good that seems to be second nature. She is witty and touching simultaneously. Each of Olive Pendergrass’s rousing verbal exchanges will strike some form of response. Some of them make you want to laugh, others make you want to cheer. Olive uses her sarcasm to mask her true feelings about being socially unnoticed in high school. The touching moments are as good as the sarcastic ones. After the reality of her new found false promiscuous reputation catches up to her with the actual expectation of carrying out her perceived sexual deviance, Olive is extremely dejected. When the gravity of her choices finally weigh down on her, we are all touched by her sorrow. Stone’s multifaceted portrayal of Pendergrass drives the film, forcing all of the other members of the talented ensemble cast to match.

In addition to Emma Stone’s performance, the film is chocked full of other scene stealing performances by some good Hollywood veteran actors. Stanley Tucci and Patricia Clarkson are enormously charming as Olive’s parents. The pair’s interaction and clever banter with Olive are some of the best in the film. Thomas Hayden Church is also commendable as Mr. Griffith. Malcolm McDowell and Amanda Bynes also add to the comedic wordplay of Easy A. Each verbal swapping between Pendergrass and one of the other characters is as humorous as the previous one. 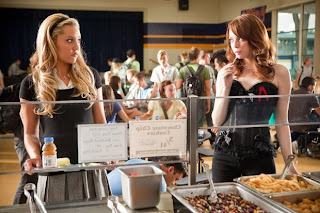 The only detractor from the movie was the level of sarcasm that each of the characters was able to use in every exchange. Olive hyper level of sarcasm was to be expected and applauded in most of the exchanges. However, every verbal interchange became an excessive display of verbiage. This was entertaining but it detracts from the audience’s level of belief in the characters.

Easy A is an entertaining, fun movie. The film is highlighted by well acted characters with good character interactions, and full of sharp dialogue. The movie is a very enjoyable as it was clearly inspired by some of the John Hughes classic coming of age films of the 80’s (Pretty in Pink, Ferris Bueller’s Day Off). The plot is skillfully written which allows for Olive’s story to cover multiple aspects of high school life, allowing the audience to be able to relate to it at one time or another during each of our high school years. That coupled with Stone’s extraordinary portrayal of Olive Pendergrass gives Easy A an universal appeal that transcends gender and generation. The film is a great movie for all to see.
Posted by Da'Mon at 6:32 AM