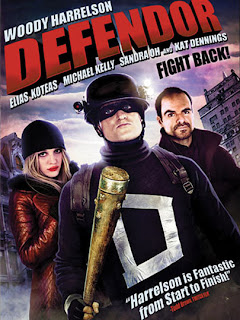 Rating:
***½
By: Da’Mon Guy
Defendor is a really touching, dark comedy wrapped in the truth of today’s world that takes a different approach on the superhero genre. It’s right along the lines of Kick Ass. The movie is carried by a really good performance by Woody Harrelson (Zombieland). It also features Kat Dennings (Charlie Bartlett), Elias Kotas (Shutter Island), Sandra Oh (Blindness), and Michael Kelly (Law Abiding Citizen).
Arthur Pennington (Harrelson), a slightly mentally challenged construction worker, whose mother died by drug overdose. Inspired by comics and fueled by the desire to stop others from the same fate, he dons the guise of a superhero to clean up the streets. Donning the name of Defendor he tries to exact justice and in the process he befriends a prostitute (Dennings) and inspires the city.

Defendor is the touching story of a misguided individual who is inspired by comic books to become a superhero. The movie is set in the real world and it’s full of comedic moments. However, this is really a story about courage, friendship, loyalty and standing up for what we believe in. Its about one man who wants to do better for others because he doesn‘t want anyone else to endure what he has. The now cliché saying of “one man can make a difference” is what this is truly about.
Woody Harrelson is quickly becoming one of my favorite actors. He has great flexibility and diversity in the roles he chooses. As in most of his performances, he hardly disappoints and Defendor is no different. The performance of Woody Harrelson is a stand alone performance as he single handily carries the movie. Harrelson as the mentally challenged Pennington is believable and very entertaining.
There are some good comedic moments as Defendor continues to fail repeatedly as he tries to clean up the streets. Everything about Defendor has comedy in it. From his costume, to his dialogue, to his misguided efforts to be a hero is funny and entertaining. He has no special powers nor does have any exceptional fighting prowess. He’s probably the worse superhero ever but what he does have is the heart and courage that all heroes should have. The message that is embedded within the comedy of this story is a really serious one and will really touch you. Defendor is a film that demonstrates that no matter who you are you can make a difference in some way.