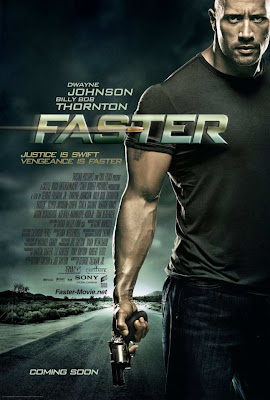 Rating:
****
By: Da’Mon Guy
Memorable quote: “God can’t save you from me.”
Faster is a first-rate action thriller that will satisfy any adrenaline junkie. It’s excellent return to the action movie genre for Dwayne “The Rock” Johnson (The Other Guys). The movie also utilizes the talents of a high-quality ensemble cast featuring Billy Bob Thorton (Bad Santa), Oliver Jackson-Cohen (Going the Distance), Carla Guino (Rightous Kill), Moon Bloodgood (Terminator: Salvation), a (G.I.Joe: the Rise of Cobra), with appearances by Mike Epps (Next Day Air) and Tom Berrenger (Smokin‘ Aces: Assassin’s Ball).
After serving a 10 yr sentence, An ex-con vows to avenge his brother’s death. Determined to stop at nothing, He sets out to kill the everyone who was involved in the double cross that left his brother for dead.
Faster is a really enjoyable, well put together action movie. it’s one of the better one’s that have been released in some time. The movie waste no time as the action begins almost immediately. It moves at a terrific pace as the story is interwoven with the action terrifically while the details of the plot are revealed within the course of the film a little at a time. The fight and car chases were realistic and very entertaining.
The film is carried by Dwayne “The Rock” Johnson’s performance as Driver. Dwayne Johnson depiction of driver is very convincing. Most of his performance is communicated non-verbally as his body language does all of the talking. The subtlety is terrifically evident as a look or the way he enters the room communicates his emotion. The Driver is a man obsessed, and you can feel the intensity of the character in almost every scene as he tracks the people responsible for his brother‘s death. In every exchange between the Driver and one of his opponents, the audience can feel the intensity and energy of the scene. This fits this particular role perfectly and “the Rock” doesn’t disappoint. He is both believable and sympathetic simultaneously. He looks and plays the part exquisitely. The other two major stars do a good job as supporting actors as well. Billy Bob Thornton also does a good job as the conflicted cop in the movie. Thornton’s performance is a good opposite to the intense performance of Johnson. The Killer was the weakest of the three main characters. He was an extremely conflicted character that the story could have done without. His role in the film was moderately enjoyable but it was really unnecessary as he the story would be the same with or with him.
Faster is a movie that is enjoyable on a multitude of levels. It was more than just your normal “shoot em up, bang, bang” movie. It’s filled with terrific undertones. The movie is an action movie but there were great nuances about life, choice, redemption, forgiveness, and morality. Nearly half of the movie is spent on a highway as Driver constantly traveled up and down the highway constantly. It was very symbolic of the path between good and evil in his pursuit for justice. The movie also exhibits excellent examples of forgiveness and the choices that help us become who we want to be and not who we are forced to become. Driver exhibits that. He suffers a great change of character by the end of the movie. Whereas in the beginning of the movie, he is hell bent almost consumed by revenge but by the end of the film he is able to show some mercy and that his action were not just about revenge but more about the justice for the death of his brother.
I really enjoyed Faster. It's a movie that can keep everyone entertained as it plays out like a modern day western. The movie is definitely something to go the theaters for and leave satisfied. It was easily the best movie for Dwayne Johnson since the Rundown. In a time of limited action stars, he needs to embrace this role and give us more movies like this. I easily recommend this to anyone who enjoys a good movie.
Posted by Da'Mon at 11:47 AM