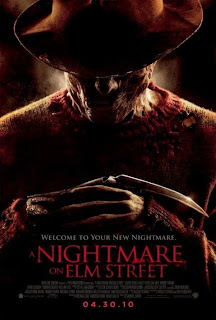 Rating:
***
By: Da’Mon Guy
The pillaging of the 80’s rages on as A Nightmare on Elm St falls victim to Hollywood's ravaging of classic 80’s films. The new re-imagining stars Jackie Earl Haley (Watchmen), Rooney Mara (The Social Network), Kyle Ganner (Jennifer’s Body), and Thomas Dekker (The Sara Connor Chronicles). The 2010 Nightmare on Elm St is directed by Samuel Bayer.

The new version of A Nightmare on Elm St offers some deeper insight into the character of Freddie Kruger. This new version actually builds on the origins of Freddie as none of the previous “Nightmare” movies never did. The old “Nightmare” films simply covered Freddie origins through word of mouth from other characters on screen. Although, the word of mouth story telling of Freddie’s origins added to his the boogeyman mystic, it clearly was something that needed to be shown. The 2010 Nightmare on Elm St deep into his origin. The movie connects many of the little details that were associated with Freddie. From his clothes, to his choice of weapons, to the classic child’s song linked with Freddie. Within a series of flashbacks, we are able to bear witness to the tragic death of the former child molester. This movie actually illustrates the details of his demise. It also addresses in greater detail the connection between the victims in the original movie and Freddie, especially between Freddie and Nancy.

The 2010 version of A Nightmare on Elm St reverts Freddie to more of his sinister ways of the original movie. The new movie reverts him to the “monster” that he was intended to be. It eliminates the campy aspect that Freddie had attained in many of the sequels. The movie tries to incorporate the “blood and guts” of today’s horror movies with the scare factor of the movies of old. It does bring a level of realism to the story that the old movies never had. In addition, it incorporates some of the classic killing scenes from the original.
The problem is that by increasing the level of realism it eliminates some of the creative ways that Freddie would kill his victims. That was a trademark of the original Nightmare movies. This film falls to connect the fact that Freddie stalks for one. He takes pleasure in the stalking of his victims. This movie doesn’t do that. Most of the stalking isn’t there and the kills are too quick and uncreative. The stalking and terrifying his victims was the real pleasure for Freddie not the killing. This movie falls to understand that important fact. Increasing his victims fear and was the source of Freddie’s pleasure and power. This was never more clear than in the first movie as at the end of it, Freddie is powerless because Nancy doesn’t fear him anymore.

Jackie Earl Haley does an admirable job in donning the mantle of Freddie Kruger. He doesn’t have Robert England’s “swag” but he makes this version of Freddie more vicious than Englund ever was. Robert Englund made Freddie one of the truly great horror characters of all time. He was the perfect combination of terror with a little comedy mixed in. No one could ever surpass his portrayal of this character. He single handily carried almost all of the “Nightmare” movies as after Nancy there was never a co star that could measure up. Jackie Earl Haley does come close. He doesn’t have Englund’s pungent for sarcasm as Englund always had the right lines for his timely killings. Haley on the other hand makes Freddie more brutal but he eliminates his personality. Through Haley’s portrayal of Freddie we feel the rage and anger that Freddie carries within from being murdered but we never get the sense of enjoyment that Englund’s Freddie got from killing his victims. Haley does try to add his own trademarks to the character such as the constant twitching of the knives as he stalks his victim. Haley’s approach to Freddie adds a brutality that Englund never matched. Rooney Mara’s depiction of the character of Nancy was no where near Heather Langenkamp’s prior depiction. She didn’t exhibit the strength or toughness that Langenkamp’s performance of Nancy had. It was clearly a detractor in this iteration.

This new retelling of one of our beloved childhood horror stars isn’t as bad as it was the first time I watched this. My expectations prior to seeing this movie are the main contributors for my disappointment of it. I had such lofty expectations when I heard that there was another Nightmare on Elm St coming out, only to be presented with another damn re-imagining instead of a prequel or a sequel. For those of us who grew up with the Nightmare on Elm St movies this was simply an outrage. However, If we can separate ourselves from our emotional connection to the character of the 80’s, then this movie wasn’t that bad. It gives us a really good look at the origin of Freddie and it granted us a great deal of clarity into the relationship between Freddie and Nancy. It clearly wasn’t what I expected but it was no where near as bad as it initially was the first time I watched it. This movie is a worthy addition to the previous “Nightmare” films. Compared to some to the sequels, it’s actually better than a many of them in a lot of ways. Fans of Freddie should watch this without prejudging and give it a chance.
Posted by Da'Mon at 6:23 AM