The Wolfman: "A Glorius Return of a Classic Hollywood Character" 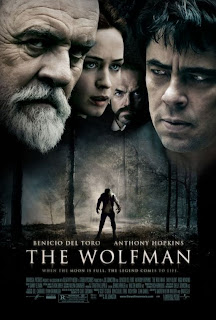 By Da’Mon Guy
The Wolfman returns! The latest addition to the werewolf legend is a terrific combination of horror, action, and suspense. This new incarnation finally returns a classic Hollywood creature to its roots and gives him the glorious film that he deserves. The movie showcases a talented cast featuring Benicio Del Toro (Traffic), Emily Blunt (The Devil Wears Prada), Anthony Hopkins (Fracture), and Hugo Weaving (The Matrix trilogy).

A series of gruesome murders haunt a 19th century town. Lawerence Talbot (Del Toro) returns home to discover his brother, Ben, was viciously murdered. Lawerence vows to atone for shortcomings in their relationship swearing to uncover the details surrounding his brother’s demise. In the midst of his search, Lawerence falls victim to the bite of the werewolf.


The Wolfman  is a remake loosely based on the 1941 classic movie by the same name. The original version starred Lon Chaney, Jr. The movie features the same characters and the plot is very similar but this version more enjoyable on a multitude of levels. The new story adds more depth to the character and is rich with details, action, suspense, and love. The visuals are great. This new film greatly improves on the original version in every way as well in the process of paying homage to the original classic. This version of the werewolf story blends the half man, half wolf look as it did back in the early days of movies. The movie adheres to many of the details that are now left out in many of the modern tellings of the werewolf stories. This look and the attention to many of the small, forgotten details definitely enhances the look, feel, and retelling of the story.


The new film is vastly expanded as it divulges more into the psyche of the main character, Lawerence Talbot. This version really explores the tortured spirits that haunt Talbot even before being bitten by the beast. He was already dealing with an emotional trauma of the apparent suicide of his mother. This movie also shows how the burden that the failed relationships of the Talbot family weigh on Lawerence Talbot. In two distinct scenes, we are shown how Lawerence has always been dealing with his inner demons surrounding his family. He is haunted by the death of his mother, the lost relationship with his brother, and the strained relationship with his father. The movie does an excellent job in addressing the tortured soul that the now possessed werewolf inhabits.

Benincio Del Toro exquisitely depicts Lawerence Talbot. His performance really shows the withdrawn nature of Lawerence Talbot from the opening of the movie. His depiction is perfect as we feel the distance that Talbot has placed between him and the rest of the world right from the beginning of the film. In every exchange between he and another person you can see that Talbot has a disdain for people until he meets Gwynn Kundiff. Emily Blunt gives an average performance. She doesn’t measure up to Del Toro’s performance. The chemistry for this romance never sparks. Anthony Hopkins offers a terrific performance as Sir John Talbot, Lawerence’s father. He is equally mysterious and devious. He elegantly makes the most of every minute that he appears on screen. The audience is never aware of his true motives because of his performance which enhances the outcome of the climax of the movie.

I loved this remake of the Wolfman. This was well overdue, It was about time that someone did at least one of the classic Hollywood horror creatures justice. The movie returns to the "horror" feel of films instead of the insane amount of blood, guts, and gore that many of today's horror movies are filled with. Every aspect of the film is great. The story, the cast, as well as the look and feel of the movie is exactly managed. No aspect of this movie will disappoint. Anthony Hopkins said it best when he said “The Beast will have his day,” and thanks to this great retelling, it does.
Posted by Da'Mon at 7:47 AM