Extract: "An Inexcusible Waste of Time" 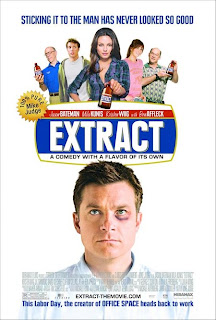 Joel (Bateman), the owner of an extract manufacturing plant, is having a string of bad luck that begins when his wife, Suzie (Wiig) won’t have sex with him. He then constantly finds himself in precarious situations that steadily worsen by the minute. First, his soon-to-be floor manager acquires a serious injury in a machine malfunctioning accident that subsequently endangers the wellbeing of his company. Second, his personal life doesn't fair much better when he takes the advice of his bartending friend Dean (Affleck) during a drug-induced brainstorming session on how to test his wife's faithfulness. Finally, compounding these catastrophes is new employee Cindy (Kunis), a scam artist that Joel wants to have an affair with, is intent on milking the company for all its worth. Now, Joel must attempt to piece his company and his marriage back together all while trying to figure out what he's really after in life. (Imdb.com)

Extract is a barely humorous movie. It contains an exceptionally limited amount of comedic moments as the laughs are very scarce. There are a few situations within Extract that do garner a laugh or two. The situation where Jason Bateman pays a “idiot gigolo” to sleep with his wife is very humorus. In addition, the annoying neighbor who has a tragic heart attack while being criticized for being annoying, and the weed smoking incident with Affleck and Bateman are somewhat comical. However, most of the other situations that are supposed to be funny fall completely flat.

Extract contains a few fleeting moments of comedy but there’s no where near enough to endure this tragedy. This movie will frustrate you the longer you watch it. There isn’t much to be positive about in this film. It rapidly goes from good to bad to awful in a heartbeat. Any one that would suggest this movie to someone should be mule kicked in the head. My life has definitely been diminished by viewing it in its entirety.