Jonah Hex: "A Disappointing, Mismanaged Use of Talent" 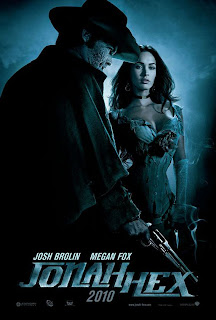 Rating:
**1/2
By: Da’Mon Guy
The era of the comic book characters continues to dominate Hollywood with Jonah Hex being the latest character to be brought to life on the big screen. This misfortune boasts big action sequences but it lacks depth. The movie stars Josh Brolin (Wall Street: Money Never Sleeps), Megan Fox (Transformers 1 & 2), Will Arnett (Semi-Pro), and John Malkoivch (Red).

Jonah Hex (Brolin) is a former confederate soldier whose family is murdered. Left for dead, Hex develops a connection with the afterlife. Upon his return to health, He then becomes obsessed with revenge and sets out to kill the man responsible for killing his family.


Jonah Hex is based on one of DC comics lesser known characters of the same name. It makes a good attempt at capturing the spirit of the book as the big screen version mirrors the one portrayed in the comic. Many of the details of the comics character are covered but the movie misuses the motivations of the character. The movie moves at too fast of a pace. The hurried pace causes the movie to be too superficial almost cartoon like. In spite of this being adapted from a comic book, it should have allowed for a deeper emotional connection. At the heart of the character is his loss. The death of his family is the trigger for all of the events that follow as well as his motivation for everyting that he does. Within the movie, too many of the scenes are too quick so they lose the dramatic affect. The movie quickly races through too many of the scenes in order to get to the action.

The film’s biggest downfall is the mismanagement of Jonah Hex’s origins. They are covered but not in enough detail to allow us to sympathize with his loss. The loss of his wife and son are the main motivations for everything that he does and this movie whisks through those significant details as well as his time with the Indians which shaped him into the character before us. Those two significant details are treated as a speed bump. Hex’s wife and son are never shown. We hear them but they never fully appear on screen. We never get the full affect of the scene as the connection is lost because of the lack of sight of Jonah family. In the time that we live now, visuals go a long way and just hearing the suffering doesn‘t quite establish the same intensity or affect that it should have had. We never really feel his loss. Consequently, the scene isn’t as powerful as it should have been. It doesn’t garner the compassion that it could’ve had.

The big screen version of Jonah Hex doesn’t leave too much room for compelling performances. There wasn’t one stand out performance worth mentioning even though it had two really good actors as the stars. The movie wastes the talents of Josh Brolin and John Malkoivch. Brolin’s depiction of Hex is excellent but the limitations of the script really hurts his performance. He has the look and “feel” of Jonah Hex as he is written in the pages of the comics. But the movie doesn’t allow for Brolin to go beyond a few words here and there or the occasionally grunt in his portrayal of Jonah Hex. Hex is much the same in the comics but there is a lot more depth to the character that is not always communicated verbally. John Malkoivch is one of the best actors at playing wild, strangely odd characters. He also makes an exceptional villain. In this movie he’s got the wild down but there is nothing exceptional about his depiction of Quentin Turnbull. Its just an opportunity of him to say a couple of lines, kill someone or blow something up. Megan Fox is nothing more than the eye candy that she is in every movie. Her performance is no different than any other. Shallow and worthless. She should start taking non speaking roles as she is only on screen for how she looks. Her quick one liners are not entertaining at all.

This movie had a lot of potential but too many scenes and details are sacrificed or rushed through which lead to the downfall of the movie. It had the look of the comic and is loaded with action but that doesn‘t make up for its shortcomings. In addition, its only an hour and twenty minutes, much too short to cover this story. In the end, the movie is extremely superficial. I was so disappointed. I had high aspirations for this movie. The combination of the two lead actors and this story would've been a really good movie if it was handle correctly. Jonah Hex was watchable but could’ve been so much more.
Posted by Da'Mon at 4:56 PM