The Lost Tribe: "A Sound Story that Lacks the Budget to Suppport it" 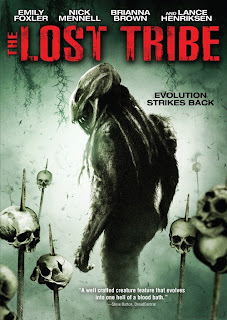 Rating:
**1/2
By: Da’Mon Guy
The Lost Tribe is a rare treat that only occurs every once in a while in direct to video movies, it‘s actually half decent. This is a mildly entertaining direct to video movie that is comprised of a cast of unknowns that includes Emily Foxler (Ghosts of Girlfriends Past), Nick Mendel (Friday the 13th 2009), Marc Bacher, Brianna Brown (Knocked Up), Maxine Bahns (Paradise Lost), Hadley Foster (Dr. Who), and an appearance by Lance Herkinson (Alien vs. Predator). The movie is a remake of another direct to video movie named The Forgotten Ones.

After a devastating boat crash, a group of friends are stranded on an uncharted island where they encounter an ancient tribe of humanoid creatures, who may be the missing link in the evolutionary process of man.

The movie’s plot is fairly plausible but it is missing aspects that hinder the story. The movie focuses on the crash and the four people that visit the island. But the subplot is about what’s known as man’s missing link, the unknown evolutionary step between man and ape in the evolutionary process. In this film, a scientist discovers it. And because of the discovery, the church pays someone to make this information disappear because of the religious ramifications. This subplot builds a terrific back story to the movie but the rest of the film does nothing to resolve that particular set up. That was definitely a downfall to this film.

The cast and their performances aren’t great but Emily Foxler does an admirable job as our protagonist. Foxler depicts Anna as both fragile and driven. Anna is a believable and likable character that we can understand the transition of her character. Her motives are clear as she is motivated to becoming the heroine of the film. With a better script, she could have easily made this role better. Nick Mendel isn't too dreadful as her boyfriend. Their tragic love story at the heart of the film was commendable. The other actors were a complete waste of time, and the special effects are limited. Many of the aspects of the film will be recognizable as some elements of the film is very reminiscent of Predator and Congo to name a few but this is a direct to video movie so the expectation shouldn’t be too high. The film’s climax was moderately entertaining, but it was very reminiscent of Predator 2. However, it was quite entertaining, as we see Anna battle the head of the “lost tribesman” and showcases primal nature of man and beast.

The Lost Tribe is a direct to video movie that has a number of shortcomings. The biggest downfall is the lack of budget. The movie’s severe lack of funding hinders this film tremendously. If it had a descent budget, then the film could’ve matched its potential of the story. The second major shortcoming that this film faces is the inconsistencies in the story. The Lost Tribe does possess a fairly solid storyline, and in spite of containing some inconsistencies in the story, the movie is viewable. The film begins with a really good build up but it never ties up many of the details of the underlying subplot of the story that are shown in the beginning of the movie. It also has some decent performances by a bunch of unknown actors. If you can stomach the movie’s lack of budget then this makes for a treat among direct to video movies. If you don’t place too high of an expectation on this movie then it will be worth the time it takes to view it. It’s not something that I would recommend but for hard core movie fans it’s something to see. The movie isn‘t that good, it simply isn‘t awful.
Posted by Da'Mon at 8:04 AM