State of Play: "An Exceptional Politcal Thriller that Never Bores" 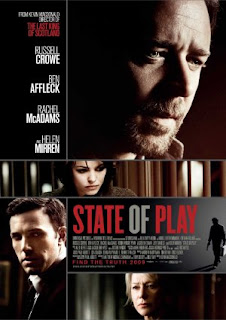 Rating:
****1/2
By: Da’Mon Guy
State of Play is a captivating political thriller stockpiled with deception, subterfuge, and betrayal. This is a motion picture adaptation of a six part BBC television series. The film is constructed of a talented cast that is highlighted by a trio of first rate performances by Russell Crowe (Robin Hood), Ben Affleck (The Town), and Rachel McAdams (The Time Traveler‘s Wife). It also features great supporting performances by Hellen Mirren (Red), Robin Wright (New York, I Love You), Jeff Daniels (Traitor), and Jason Bateman (Couples Retreat).

A team of investigative reporters work alongside a police detective to try to solve the murder of a congressman's mistress. A petty thief is gunned down in an alley and a Congressman's assistant falls in front of a subway - two seemingly unrelated deaths. But not to wisecracking, brash newspaper reporter Cal McAffrey who spies a conspiracy waiting to be uncovered. With a turbulent past connected to the Congressman and the aid of ambitious young rookie writer Della Frye, Cal begins uprooting clues that lead him to a corporate cover-up full of insiders, informants, and assassins. But as he draws closer to the truth, the relentless journalist must decide if it's worth risking his life and selling his soul to get the ultimate story. (Imdb.com)

State of Play is a exceptional suspense story that never bores. The movie’s mystery begins immediately from the opening minute. The film is well played out as the events of the story has many twists. The twist and changes in the film quickly build anticipation for the next twist in the story which enhances the suspense of the movie. The film is a multilayered story that speaks volumes about today‘s society. In one breath, it aptly exhibit’s the lengths that people will go for financial and sexual rewards. Then, it shows the character and passion of the people who dedicate themselves seeking the truth.

State of Play is packed with a number of high-quality performances. Every role is played exquisitely. Crowe, McAdams, Affleck, Mirren, Wright, Daniels, and Bateman are all on the top of their game in order to deliver a top caliber whodunit. Crowe’s portrayal of the driven reporter, Cal McCaffery, is done exceptionally well. Rachel McAdams as Della Frye, is an excellent supporting character to McCaffery. Ben Affleck delivers one of his best portrayals and it is also one of the best performances in a film filled with superb acting. Affleck’s outstanding depiction of Congressman Collins is at the core of the film as his character is one of the driving forces of it.
The film contains a number of excellent aspects intertwined into the story that increases the enjoyment of Cal McCaffery‘s pursuit of the truth. The back story to the relationship between he and the Collins, both Stephen and Anne was a terrific dynamic to the story.

State of Play took me by surprise. I assumed that it would be good but no where near as enjoyable as it turned out to be. State of Play is as good as it gets when it comes to mysteries. This is a first rate whodunit that will have you guessing until the end. The story is deliciously well written as the plot will delectably twist and turn. It will take hold of you and have you in suspense waiting for the next turn. The characters of the story are aptly well portrayed. This is a brilliant suspense thriller in the mode of an Alfred Hitchcock type mystery. The movie is a must see and you will love every minute of it.