Scott Pilgrim vs. The World: "This is Possibly the Dumbest Movie Ever" 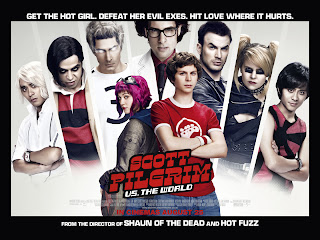 Scott Pilgrim vs. The World is a brainless catastrophe that is easily one of the worse movies that I have seen to date. This dim witted debacle is the latest film to star the unendurable Michael Cera (Youth in Revolt). The movie also features Mary Elizabeth Winstead (Live Free or Die Hard), Allison Pill (Dan in Real Life), Mark Webber (Snow Day), Johnnie Simmons (Jennifer’s Body), Ellen Wong (Unnatural History, TV series), and Kieran Culkin (The Cider House Rules) The movie contains a number of guest appearances by some good Hollywood talent. Brandon Routh (Superman Returns), Clifton Collins, Jr. (The Experiment), Thomas Jane (The Mist), Chris Evans (The Losers) all show up in this debauchery.

In order to date the girl of his dreams, A young man, Scott Pilgrim (Cera), must fight her seven former ex’s to the death in order to be with her.

There is very little to be positive about in this ludicrous depravity. Scott Pilgrim vs. the World has only two aspects of this calamity worth mentioning, one of them is the movie’s special effects. The visuals of the movie are top-quality. They are cutting edge and state of the art. From the opening credits, the movie unfolds just like a video game. Many of the bleeps and quips from old 80’s video games are added to the film to give an old school Nintendo feel. This particular aspect was very impressive. Most of it was excessive to the point of exasperation. However, it was very innovative, giving the movie a lot of originality. The battles were also a pleasure to watch in spite of the ridiculous nature of them. The fights were remarkable and well choreographed.

The second positive aspect of Scott Pilgrim vs. the World is that it has a very warm message embedded within its absurdity. The film teeters the line of idiocy but if you can look past the ridiculousness nature of it then one can discern that it really has good intentions. It speaks volumes about overcoming and look past someone’s faults and or shortcomings in order to be with them. The movie is also about overcoming the obstacles for someone that you potentially love. Ignoring the past and look forward to building with them for the future. The film also does a good job at addressing the nature of breaking up with someone. It shows how one should overcoming bad feelings and then make penance for wronging others.

The only thing worse than watching Michael Cera in a movie is watching THIS movie with movie with Michael Cera as the star. Cera’s comic style of incisive babbling is intolerable enough when he is in a good movie. Paired with this misfortune, It was as bad as getting a route canal.

There isn’t any reason in Scott Pilgrim vs. The World to even remotely suggest that it is worth viewing. It easily one of the stupidest movies that I have seen in some time. The plot of the story is dumb and the movie’s delivery of it is simply idiotic. The movie is utterly senseless to the point of being unwatchable. This was an almost unbearable hour plus. The only reason that I finished watching it was to be able to warn as many people as I could of this ludicrous disaster. I feel like someone stole an hour and forty two minutes from my life. I would love use everyone responsible for the creation of this film for target practice with a large caliber assault weapon.