The Warrior's Way: "The Greatest Trick Ever Played" 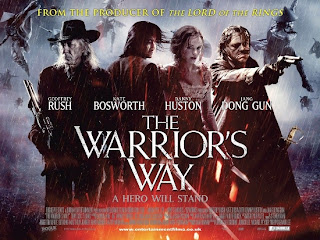 The Warrior’s Way is a trav-sham-mockery! This film is the biggest swindle that I have ever witnessed by a movie. This misleading debacle is an unsatisfying story in the Crouching Tiger, Hidden Dragon mold. The Warrior’s Way stars Jang Dong Gun (The Promise), Kate Bosworth (Superman: Returns), Geoffrey Rush (Pirates of the Caribbean), Danny Huston (X-Men Origins: Wolverine) and Tony Cox (Disaster Movie).

After refusing to kill a baby, who is the last member of his clan’s 500 year war. A samurai-assassin, known as Yang (Dong Gun), becomes hunted by his own clan. Rescuing the baby and then escaping to America, he is befriended by a wild west circus.


The Warrior’s Way is a trav-sham-mockery! (Travesty, Shamble, Mockery) What that means is that this movie is most certainly not what it promoted to be when looking at the trailer. The movie’s first 10 minutes and the movie’s last 30 min are all of the kung fu that it contains. This movie is the best example of how trailers can sell movies tickets. The film is fairly entertaining but it is no where near the martial arts spectacle that it is advertised to be.

The film is visually captivating. It’s a visual delight filled with excellent cinematography. The movie has a look and feel of the style of 300. The action sequences of the film look just like they are jumping off of the pages of a comic book. This look enhances the look and feel of the movie as it quickly absorbs the audience into the fight sequences.

There really isn’t any performances to highlight the movie. Dang Gun as Yang is likeable and looks good in his martial arts scenes. His character doesn’t speak much in the film. He looks uncomfortable in most of his normal scenes but he’s in the film for his martial arts and he does a first rate job with those scenes. Kate Bosworth was mildly entertaining in her performance of Lynne. Her bogus country accent was terrible and extremely irritating. The rest of her performance wasn’t unbearable as her character’s back story was a good addition to the main plot of Yang’s. Geoffrey Rush, Tony Cox, and Danny Huston all give commendable performances in a lackluster movie.

The opening of the film establishes an brilliant pretense for a martial arts film as the hoax begins. The opening fighting scene is fantastic and to the point. It’s visually engrossing as initial confrontation ensues. Yang is one step away from completing his dual purposed quest to become the world’s greatest swordsmen and eliminate all of the members of the opposing clan. He quickly executes them. He then becomes the world greatest swordsmen. The swordsmen are samurai and as all great samurai confrontations should go, it was quick and to the point. A terrific illustration of his level of swordsmanship. The movie brilliantly encompasses what the art of Bushido and Kendo is all about.


The Warrior’s Way biggest downfall is that this is advertised as a martial arts extravaganza. The trailers and everything shown seduces movie goers to come to the movies to see a kung fu film and this is more of a story of sympathy than it is of action. The movie has it’s good points but none of them are enough to garner the ticket price or enduring the less than satisfying back story. The movie was advertised as a martial arts movie and that’s what most people are going to go to see this with that expectation and The Warrior’s Way absolutely murders that preconception. The movie’s final scene was fantastic but it was no where near worth having to sit through the hour that it took to build up to it. The first 10 minutes and the last 30 minutes are exceptional and what the audience came to see. It’s a shame that the fighting is very limited because it is first rate and the easily the best part of the movie. More of it and the film could’ve been great. HEED MY WARNING, WAIT FOR THE DVD. Then you can watch the first ten minutes and the hit the skip so that you can watch the last 30 minutes and have the martial arts showcase that the trailer sold us on.
Posted by Da'Mon at 6:34 AM