The Other Guys: "A Tragic Misuse of Talent" 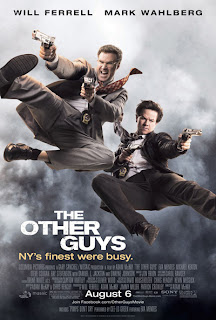 The Other Guys is a depressing flirtation with comedy that abuses the fans base of the actors who star in the movie. The film is a faintly amusing disappointment that does not live up to the star power that it contains. The movie is filled with an plethora of talent that is led by Will Ferrell (Step Brothers) and Mark Wahlberg (The Lovely Bones). The film also features Eva Mendes (The Women), Samuel L. Jackson (Lakeview Terrace), Dwyane “The Rock” Johnson (Faster), Michael Keaton (Post Grad), Ray Stevenson (Punisher: War Zone), Anne Heche (Spread), Rob Riggle (The Hangover), Steve Coogan (Hamlet 2) and Damon Wayans, Jr. (Dance Flick).

The two top police officers in New York city die in the line of duty leaving a need for someone to replace them. A mismatched duo of officers then attempt to replace them and solve the big case.

The Other Guys an extremely disappointing attempt at comedy. The film delivers a few fleeting moments of humor that evaporate quickly. It is a brief tease with being humorous but not enough to entertain even the most devote fan of Will Ferrell. The movie is no where near as funny as it should’ve have been. The Other Guys has a number of really good comedic scenes but they are quickly drowned out by the next unfunny one.

The film has a great collection of stars and it simply misuses the entire cast. Samuel L. Jackson and Dwayne Johnson were the best cop duo in the film. Their brief appearance of the film stole every scene that they were in. The film’s value quickly dropped once their characters left the movie. The other buddy cop duos in the film didn’t measure up to Jackson and Johnson in the story or with their performance. Wayans, Jr and Ripple as or the focus of the story Ferrell and Walhberg.

The movie has a few brief moments of comedic genius. Some of the comedic scenes are extremely funny such as Alan’s (Ferrell) irritating humming of SWAT’s theme song while doing paperwork to irritate Terry (Walhberg), Terry’s accidental shooting of Derek Jeter, the wooden gun that Alan is forced to carry, the scene where the explosion knocks both of them to the ground, Terry’s openly disrespectful obsession with Alan’s wife, Alan’s college persona of the pimp, “Gator.” The Other Guys does have its great moments but they are more overshadowed by the multitude of bad ones.

I think my expectations for this movie were too high which led to my level of disappointment in this movie. I really love Will Ferrell’s movies, I am one of his biggest supporters. However, The Other Guys is a disastrous catastrophy that has literally shaken my faith in Will Ferrell’s comedic ability. The film is slightly amusing and contains a few good moments of comedy but none of them are nearly enough to drown my disappointment of this calamity.
Posted by Da'Mon at 11:40 AM