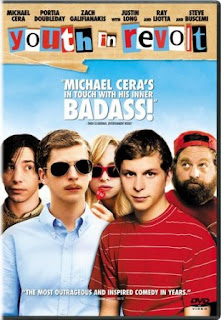 Nick Twisp (Cera) is a young teen who finds his first love but has no way to stay with her. He devises an alter ego to become the rebel that he needs to become in order to aid in his goal to fulfill his desires and lose his virginity.
Youth in Revolt is a comedic take on the coming of age story that fits into the usual coming of age boy meets girl archetype. The film contains a plot that is not too different than most. It contains many of the stereotypical elements as in most of the stories of this nature. Youth in Revolt, however, adds a really enjoyable twist to break free of the usual archetype. It breathes a lot of originality into the usual coming of age story of horny teenage boys trying to lose their virginity. The addition of the dual identity of Nick Twisp. This character gives the story a unique perspective that allows every teenager to visually live vicariously though Nick’s double identity of Francois Dellinger.

The movie features the agonizing performance of Michael Cera. Conversely, Cera actually portrays two roles in the film. Nick Twisp, is his usual whiny, loquacious, portrayal and then there's Dillinger. Dillinger is Nick’s exact opposite and the exact opposite of every other excruciating performance of Cera to this point. He’s straight to the point and more devious than anything Cera has portrayed to this point. Dellinger has no moral boundaries as he is willing to all of the bad things that teens dream of, without hesitation or fear discipline. It was a welcome change to being subjected to another one of the insufferable, over verbose performances by Michael Cera.

Youth In Revolt is full of humorus scenes. Many of them are the usual stereotypical teenage rebellion scenes but this movie slightly different approach breathes fresh life into them. The film’s terrific supporting cast is the only thing that even began to make this painstaking process of spending an hour and a half with Cera bearable. Each of the supporting actors Long, Galfinikas, Buschemi, Willard, and Liotta enrich many of the scenes with good quality humor make it comical.

Youth is Revolt is a pretty good movie in spite of Michael Cera. I would have liked this movie much better if someone else where the star. Where it really suffers is it’s star. I think that Michael Cera hinders this picture. Cera’s brand of talkative, obsessively wordy approach to comedy makes my skin crawl. I literally hate this guy. However, the movie is actually slightly entertaining. It's somewhat funny so it's humorous enough to satisfy a boring night at home.
Posted by Da'Mon at 6:30 AM