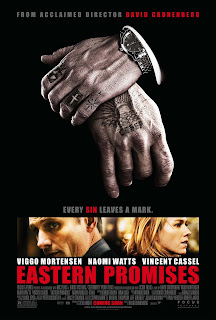 ****
By: Da’Mon Guy
Eastern Promises is an engaging, attention-grabbing story about the unfortunate, disheartening exploitation of young girls in Europe. The film gives some keen insight into the obscure world of the Russian mob. The film addresses the use of prostitution that takes place in eastern Europe. This fascinating showcase stars Viggo Mortensen (The Road), Naomi Watts (The Ring 1 &2), Vincent Cassel (The Black Swan), and Armin Mueller-Stahl (Angels & Demons).
A teenage prostitute dies while giving birth, the midwife who aids in the birth of the baby, tries to find the family. As she searches for the family of the child, she quickly becomes intertwined into the world of the Russian mafia in Europe. 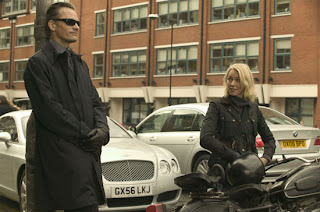 Eastern Promises premiered in 2007. It’s a compelling story that utilizes and explicitly gives some insight into a very taboo and under publicized subject matter. The film addresses the abduction and use of European Young girls that are forced into prostitution. The title of the movie, on one level, refers to promises made to young women in Russia, luring them to the West, where the Mob enslaves them as prostitutes.

The film is a slow paced tale of suspense that meticulously envelopes the audience into the dark subject matter of the film. As we follow Anna’s (Watts) journey, we insightfully introduced to the into the world of the Russian mob where we are shown the inner workings of a Russian crime family.

The film does a fantastic job incorporating intricate details to establish the level of realism. Eastern Promises is explicitly true to life in order to divulge the little known and violent lifestyle of the Russian mafia. That is one of its greatest strengths. The movie goes through painstaking lengths to make it realistic. The film contains an extremely violent scene but it is also extremely realistic.

The movie contains a multitude of small subplots within the bigger plot of the film. All of them are excellent as they support and supplement the main plot of the film. The many smaller plots such as the Kirll’s (Cassell) questionable sexuality and his estranged relationship with his father add to the richness of the main plot. 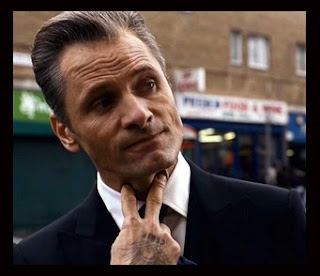 All of the major characters in the film are depicted well as each actor’s performance enriches the story. However, at the heart of the movie is a duo of outstanding performances. Viggo Mortensen and Naomi Watts both deliver two very powerful yet underappreciated character depictions. The two of the use very different approaches in the delivery of their craft. Watts gives a subtle but emotional portrayal of Anna. Her drive and passion are conveyed through facial expressions or a some silent but emotional display such as a single tear. She really embodied the essence of the story. Mortensen’s depiction of Nikolai is also very subtle but he does it more with his body language. He appropriately displays all of the mannerism of the Russian Henchman and his accent was fantastic. This was clearly one of his best performances to date.

Eastern Promises is an excellent film. This is not a usual happy Hollywood film. The movie is an eye opening story that has only one downfall, the ending. The movie has an unsatisfying, anti-climatic conclusion certainly strays away from your classic Hollywood “everything works out” happy ending. It strays away from it so much that it is almost a disservice to the movie to a point. The film is so good that the ending will shock you leaving you with an attitude. That was the only detractor to an otherwise great story that everyone should see.