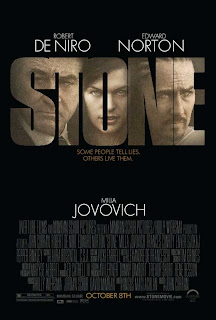 Rating:
*
By: Da’Mon Guy
Stone is a ridiculously dismal abuse of star power. This perplexing tragedy is an incestuous, meaningless waste of anyone’s time. This miserable calamity is the second movie to unite the talents of Robert DeNiro (Little Fockers) and Edward Norton (The Incredible Hulk). It also features Mila Jovovich (Resident Evil: Afterlife), and Francis Conroy (New In Town)

An aging parole officer Jack Mabry (De Niro) has only a few weeks left before retirement and wishes to finish out the cases he's been assigned. One such case is that of Gerald "Stone" Creeson (Norton), a convicted arsonist who is up for parole. Jack is initially reluctant to indulge Stone in the coarse banter he wishes to pursue and feels little sympathy for the prisoner's pleads for an early release. Seeing little hope in convincing Jack himself, Stone arranges for his wife Lucetta (Jovovich) to seduce the officer, but motives and intentions steadily blur amidst the passions and buried secrets of the corrupted players in this deadly game of deception. (Imdb.com)

Stone is supposed to be a thought provoking movie. The tagline associated with the film, “Some People Tell Lies. Others Live Them”, does more than just tells about the story within the film. The tagline is a precursor about this heartbreaking tragedy that warns viewers about the film being a malicious fraud. The film is about the consequences of life choices. It showcases four individuals that are trapped in the mundane unhappiness of their lives. Each of the characters are imprisoned, physically and metaphysically, and each of them are seeking some release or sense of meaning in their otherwise mediocre dreary life. The film illicitly details how our life’s choices can turn our lives into a prison. However, the movie is a jumbled mishap that just rambles and worsens by the second. 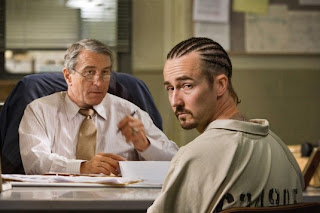 Stone has a multitude of detractors but the biggest is that the movie never gives any semblance of satisfaction. The film begins with a really good set up but it quickly lingers and never builds on the intensity of the opening scene. The movie never clearly defines anything about any of the characters. All of the characters begin one way and never progress or show their motivations for anything. The movie just goes on and on with no character resolution.

The film is comprised of three really good actors that the makers of the film use to attract the audience to it. Robert DeNiro, Edward Norton and Mila Jovovich are headlined in a film that does nothing but discredit each of their body of work in the movie industry that each of them has established. In spite of the film being a disgraceful catastrophe, Edward Norton and Robert DeNiro’s on screen rivalry is as impressive as ever. The two of them recapture some of the magic from their prior collaboration, The Score. However this ridiculous charade misuses the pair. Edward Norton’s performance of the conflicted but devious Stone was commendable as it was the lone bright spot is this pitiful debacle.

Stone is a tragic ordeal that exemplifies how a film uses actors to seduce movie lovers. The film is a literally is a pointless story that serves no purpose. It is a testament to anyone’s intestinal fortitude if you can make it through the film in its entirety. Stone isn’t just bad, it’s ridiculously awful. The only thing worse then the film, is the end of the movie. This is an insane absurdity compiled with an incredibly stupid anti-climatic ending. This was one of the worse film’s that I have ever seen. I want to break the ankles of each person involved in the creation of this movie and then back the biggest truck that I can find over them.
Posted by Da'Mon at 6:35 AM