Wall Street: Money Never Sleeps: Another Less Than Average Follow Up to an 80's Classic 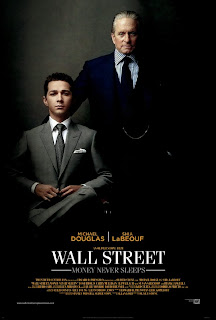 Hollywood’s love affair with reinventing 80’s movies continues as Wall Street: Money Never Sleeps is a mildly entertaining follow up to the movie Wall Street that was released in 1987. The film stars Shia Labeouf (Transformers: Revenge of the Fallen), Michael Douglass (Ghosts of Girlfriends Past), Josh Brolin (Jonah Hex), Carey Mulligan (An Education), Susan Sarandon (The Lovely Bones), and Frank Langella (The Box).

Wall Street: Money Never Sleeps is the sequel to the 1987 movie, Wall Street. It uses the fact based financial crash of 2008 as a back story for the plot of the film. This fact based back story adds to the creditability of the film. This movie is much in the same as the first movie. The sequel follows the same formula as the original and focuses on a young, up and coming, stock broker who falls prey to the manipulative ways of Gekko. The movie opens with Gordon Gekko’s release from prison in 2001as a result of insider trading and then fast forwards to 2008 and Gekko is now a public speaker talking about the evil of the economy . The story picks up and follows the life of Jake Moore (Labeouf), a young stock trader. He seemingly has it all until his boss and mentor commits suicide after he is pressured to sell his investment firm. Jake discovers that another investor at a rival firm, Britton James (Brolin), was indirectly responsible for his mentor’s death. Jake then seeks revenge against James.

The film features some commendable performances. Shia Labeouf, Michael Douglass, and Josh Brolin. The Wall Street universe revolves around Gordon Gekko. Let’s face it, The original Wall Street only became what is was because of that character and Michael Douglass’s depiction of him. Douglass reprises his Academy Award winning and one of his better know roles, Gordon Gekko. Douglass picks right up where he left off in his masterful portrayal of Gekko. He is as manipulative and cunning as ever. He masterfully uses Jake to exact revenge and re-establish a relationship with his estranged daughter. The movie is carried by Shia Labeouf’s performance as the driven Jake Moore and by Josh Brolin’s Britton James. The two play very good rivals in spite of the distinct age difference. Carey Mulligan gives an adequate performance as emotionally withdrawn, estranged girlfriend and daughter of Gordon Gekko. Charlie Sheen also makes a cameo returning as Bud Fox from the first film.

This film is hindered by a couple of problems. The first is Shia Lebeouf’s character’s motivations are never truly clear. In the beginning of the film, he is apparently motivated by money. Next, he’s campaigng to get money to support a fusion energy investment. Then he’s out for revenge, all the while he’s all about his girlfriend. The character’s true desires are extremely muddled. The second is the pace of the movie. The film moves at a snail’s pace to anyone who isn’t familiar with the knowledge of the stock world. The middle of the film is filled with a lot of information involving the financial crash of 2008 that makes the film credible but it also makes it somewhat difficult to follow. It was extremely hard to relate to as someone isn’t extremely familiar with the investment world.

The original Wall Street wasn’t that great of a film as it is more known for a character and details of it as opposed to how good the movie actually was. The film featured one of that decades great movie characters, Gordon Gekko. It was forever immortalized by Gekko’s “Winner takes all approach to the corporate world and his famous quote “Greed is Good” as it became one of the truly iconic phases from a film. Wall Street: Money Never Sleeps was a let down for me. The film had a lot of potential based upon the stars, the story, and the director but just flops. The original movie wasn’t that great but this one didn’t even measure up to that one. The first film is about money, power and greed, but it is a film about human relationships and redemption. The movie moves very slow and Gekko’s sublte character change at the end wasn’t anywhere close to being slightly convincing. The film message that love is more powerful than money was unbelievable because the characters or the story didn’t persuade the audience to accept it. A mishandled movie that truly disappoints based on all that it had going for it. A lackluster following to a cult classic that becomes extremely mundane and run of the mill.
Posted by Da'Mon at 8:44 AM