Grown Ups: "A Lackluster Mishandling of Comedic Talent that is Still Entertains" 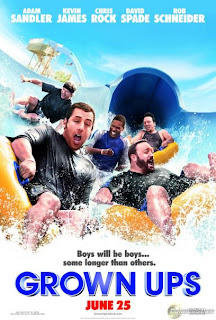 Grown Ups is a collection of witty banter and comedic scenes that focuses on a group of childhood friends that reunite to spend the forth of July holiday together after a 30 year separation. The friends and their families try to have a session of family bonding to renew their friendship.
It comically addresses the differences of growing up in to 70’s as opposed to the technologically obsessed generation of today.

The film’s biggest asset is the camaraderie between the friends that all of it’s stars portray extremely well. All five of the stars intermingle and interact extremely well which makes the friendships within the movie appear more genuine. The jokes are well timed as each of the actors chime in add their own mark to each series of ridicule between them.

One of its best attribute of Grown Ups is how it comically addresses the generational differences between the parents and their children. The film gives great comedic instances that cite the technological obsession of today’s youth as opposed to the more creative and simplistic childhood recreation of the prior generation.

Grown Ups has a couple of major flaws that hinder the success of the movie. The film’s biggest asset is also its greatest detractor. The movie is a lackluster use of the assemblage of actors that comprises it. It does entertain but it isn’t “knock you socks off funny” as you may expect. The film is just an exchange of jokes between the quintet of actors and then the next scene filled with another exchange of jokes. Not enough dialogue or anything to enhance the plot of the film. It was enjoyable for the comedic aspect of the film but it does nothing for the story, this is a movie after all and not a stand up comedic free for all.

The second is that there is a distinct lack of background of the five childhood friends. We never get any flashbacks of their childhood other than the championship game. The film only uses the basketball experience that the five friends had together as the only childhood flashbacks for the friends. It only makes a few verbal references to their childhood after that. This takes away from the credibility of the strength of their friendship.

The final detractor is not as considerable as the other two flaws but it hurt the film none the less. There was also a lack of screen time for Chris Rock. Rock is as talented as anyone of the other of the stars and his character for whatever reason was the least shown of the five friends. He had the least amount of screen time and was barely involved in many of the fivesome’s comedic interchanges.

In spite of its deficiencies, Grown Ups has a really warm message imbedded within its humor. The movie speaks volumes about the importance of family, friendship, and the simple moments that make life worth living. The theme of the movie is about family and how you should never lose touch with the ones that you love. A prime example is how the Feders (Sandler and Hayek) are wealthy and have lost touch with most everyday family occurrences while working to establish their careers. The film shows how life is not about how much wealth and material possessions you attain. It is a great example of how you must maintain a simple ideology in one’s pursuit of career and wealth but never lose touch of the more simplistic ideals that make life valuable.

Grown Ups is fairly enjoyable but no where the movie that it should be. The majority of movie goes would have assumed that it would have been hilarious based upon the stars that contained. The end result, however, is a convening of comedic talent that fails to maximize the potential of its stars. The movie is humorous but no where near as funny as one may expect. In the end, the film is a slight disappointment but it has enough to make for a good family DVD night.