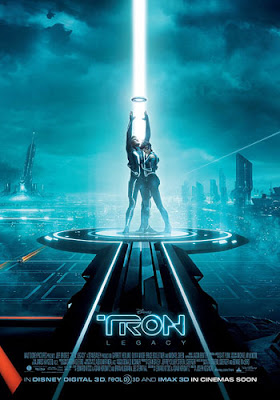 Rating:
****
By: Da’Mon Guy
Tron: Legacy is an extremely entertaining, visually captivating, long overdue sequel to a great sci fi classic. The movie stars Jeff Bridges (The Men Who Stare at Goats), Garrett Hedlund (Death Sentence), Olivia Wilde (The Next Three Days), Bruce Boxleitner (Tron), Michael Sheen (Underworld: Rise of the Lycans), and Beau Garrett (Turistas)
Sam Flynn, the tech-savvy 27-year-old son of Kevin Flynn, looks into his father's disappearance and finds himself pulled into the same world of fierce programs and gladiatorial games where his father has been living for 20 years. Along with Kevin's loyal confidant, father and son embark on a life-and-death journey across a visually-stunning cyber universe that has become far more advanced and exceedingly dangerous. (Imdb.com)
Tron: Legacy is a great follow up to the 1982 Disney ground breaking film. The movie is a fantastic visual spectacle much in the same way that the original film was. The first Tron featured innovative visuals that took audiences breaths away and the new film meets and exceeds the bar that was set by its predecessor.
The cinematography of this film adds a great tone the picture as this Tron‘s theme is much darker and more sinister than the first movie. It is a great follow up to the original as it aptly explains the progression of the story and the development of the Tron universe. The first Tron’s universe mirrored the video games of the time as it was filled with bright colors. This film uses more dark tones highlighted by colors to help emphasize the darker tone of the film.
Tron: Legacy has a very good plot that compliments the original film but it has a universal appeal so that those who never saw the first film can enjoy just as well. The story is very plausible and has very little flaws. The main flaw of the story is the subtracted role of one of its main stars from the original Tron movie, Tron himself. Tron was a warrior program that championed for the users in the first film. He led the revolution against the Master Control Program. The character in the lastest Tron film is more of a henchman and is barely seen. This was huge subtraction.
The movie is a visually stunning marvel with a multitude of underlying themes about parenting, and family embedded within the larger than life sci fi fantasy. Tron: Legacy is really about family and the legacy that all parents want to leave their children. It is a really good illustration of the obsession with career that many parents chase and in the process they often miss time or ignore the real legacy of them which is their children.
Tron: Legacy is not about performances. Conversely, the film does contain some notable ones however. The main characters in the movie are portrayed very well. Jeff Bridges, in particular, gives a enjoyable performance as Kevin Flynn. He adds a feel of nostalgia as he uses many phrases like “far out,” “way cool” or other proverbial sayings from the 1980’s to emphasize the character’s lack of progression while being trapped in the computer. Garrett Hedlund does an admirable job as Sam Flynn. The main detractor to his performance was the combat/gladiatorial games that Sam was too proficient at. He too easily defeated everyone in the games. I found it extremely hard to believe the level of ease that he had in defeating some of the more experienced fighters in the games. In the first Tron, Flynn needed the help of Tron to survive the games. In this version, Sam easily takes them out until he faces Tron. Michael Sheen was extremely entertaining in his over the top performance of Zeus. His portrayal of the excessively exuberant Zeus added some color and a great relief to the more serious performances in the film.
The original Tron was a good story highlighted by ground breaking visual effects that captured everyone attention and it was way ahead of its time with is cinematography. Tron: Legacy is not a performance driven movie. Nearly everyone that goes to see this movie will go to see it for one of two reasons. The visuals or the fans of the original film or both. The movie is equally satisfying in both of those areas as well as enhancing the original story in almost every way. Considering those two factors then Tron:Legacy is an excellent sequel to the classic.
Posted by Da'Mon at 8:44 AM