Gone: An unconventional whodunit that keeps the audience guessing 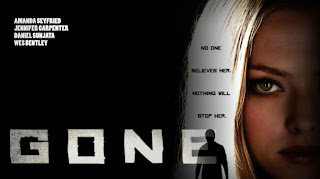 Gone is a engaging, unconventional whodunit that implements a good deal of misdirection to give a fresh perspective to story of one woman’s attempt to rebuild her life after escaping a serial killer. This offbeat approach to the retelling of the events forces the audience to question the validity of the actual abduction. The film premiered in March of 2012. The movie stars Amanda Seyfried (In Time), Daniel Sunjata (The Dark Knight Rises), Jennifer Carpenter (Quarentine), Sebastian Stan (Captain America: The First Avenger), Wes Bentley (The Hunger Games), Joel David Moore (Savages), and Michael Pare (The Lincoln Lawyer).


Gone is an mildly enjoyable psychological thriller that keeps the audience off balance until its waning moments. It tells the story of a woman who escapes a serial killer and attempts to rebuild her life. Soon after, the same killer kidnaps her sister. it’s a race against time as a woman must avoid the police while simultaneously trying to find her sister. The film uses a number of flashbacks to describe the events of Jill’s abduction. The flashbacks reveal the horrific nature of Jill’s terrible encounter.

Finish reading! Click the link:
http://www.examiner.com/review/dvd-review-gone-an-unconventional-whodunit-that-keeps-the-audience-guessing?cid=db_articles﻿
Posted by Da'Mon at 6:45 AM