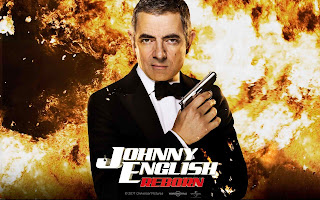 Rating:
﻿
**1/2
By: Da'Mon Guy
Any film that has any level of success in modern movie making usually guarantees at least one sequel. Some go to video others make it to the screen. More often than not, these unwarranted additions do not equate to the level of enjoyment that the original had. Johnny English: Reborn is a good example of sequel gone wrong. Johnny English: Reborn is the outrageous, moronic debauchery that continues the buffoonish misadventures of MI-7’s top screwball agent, Johnny English. The movie is the zany sequel the 2003 movie, Johnny English. English’s ineptitude is on full display as he returns to fight against a team of assassins known as Vortex. it’s a imbecilic approach to a redemption and penance. The movie stars Rowan Atkinson (Johnny English), Gillian Anderson (X-Files: I Want to Believe), Rosemund Pike (Wrath of the Titans), Dominic West (John Carter), and Daniel Kaluuya (Chatroom).


Johnny English: Reborn is a jocular, mind-numbing mirth that attempts to poke fun at the spy genre in the tradition of other great spoofs like The Naked Gun trilogy and Spies Like us. It’s a film that humorously embellishes on the James Bond series of films but it also manages to humorously implements elements from such films as Rambo, Batman Begins, and Unknown.
Click the link to continue reading:
http://www.examiner.com/review/dvd-review-johnny-english-reborn-2011-sequel-gone-bad﻿
Posted by Da'Mon at 8:10 PM