The Grey: An engrossing, hard nosed testament of man's fight to live 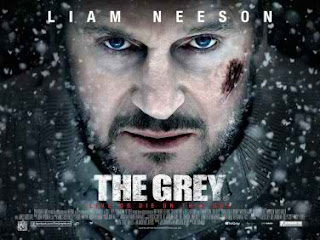 In the modern era of film making where the action star has become an endangered species, Liam Neeson has rose to become one of the few names to help to keep the action star from becoming extinct. One of his more recent films, The Grey, recently debuted on home video. The Grey (rated R) is a ferocious, hardnosed testament of survival and the indomitable nature of man. This is a action-oriented tale that pits man against a the combination of nature and beast. The movie stars Liam Nesson (Battleship), Frank Grillo (Warrior), Dermont Mulroney (J. Edgar), Dallas Roberts (3:10 To Yuma), Joe Anderson (The Crazies), Nonso Anozie (Conan The Barbarian 2011), and James Badge Dale (Shame).

The Grey is panic inducing, pragmatic happenstance that uses the incredible forces of nature to induce a high level of fear. The movie is a great exhibition that displays the struggle for life. It also shows how one tries to overcome the extremes that one will could be forced to survive if they were stranded in the wilderness. This is an extremely unique action thriller that focuses a group of seven survivors courageous trek to return to civilization after devastating plane crash. it’s a life and death fight against a pack of wolves who are stalking them.

Click the link to finish reading:
http://www.examiner.com/review/dvd-review-the-grey-an-engrossing-hard-nosed-testament-of-man-s-fight-to-live?cid=db_articles﻿
Posted by Da'Mon at 7:33 AM